Giacomo Gates: It's All Cool 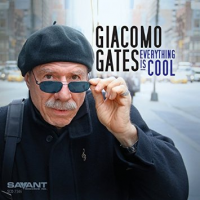 slideshow
One of my favorite male vocalists is out with a new album—Everything Is Cool (Savant). I last wrote about Giacomo when his Miles Tones was released (here). And before that The Revolution Will Be JazzL The Songs of Gil-Scott Heron (here). Giacomo's groovy baritone is a throwback to a time when jazz vocals didn't just mean the American songbook.

Here's an excerpt from my liner notes...

“Nobody sings like Giacomo Gates these days. Back in the late 1940s and 1950s, when cool ruled and hip vocalese artists were the rage at jazz clubs, the list of crazy crooners included Babs Gonzales, Annie Ross, Slim Gaillard, Earl Coleman, Dave Lambert, Jon Hendricks, King Pleasure, Eddie Jefferson, Jackie Paris, Bob Dorough and Mark Murphy. Unlike square pop vocalists, vocalese singers were as gone as the jazz musicians they opened for at clubs. Many wrote lyrics to signature instrumental solos and nearly all phrased like Lester Young’s jumping dry saxophone.

“Gates comes out of this tradition, but unlike many jazz singers today, he knows something about the blues. Born in Bridgeport, Conn., in 1950, Gates grew up in a working-class family. 'I studied guitar between age 8 and 16, and started listening to jazz when my father put on a big band album,' Gates said. 'I was hooked after that.'

“In 1969, after high school and technical school, Gates began working road construction as a laborer, truck driver and heavy-equipment operator. Next came a series of nocturnal jobs as bouncer, blackjack dealer, liquor-store manager and bodyguard for ladies of the night. At age 25, he left for Alaska, working briefly on the Trans-Alaska Pipeline before heading south, taking jobs building roads, dams and landing strips in wilderness areas from Washington State to Arizona.

“In 1989, at age 39, Gates took part in a summer arts festival in Fairbanks, Alaska, and was encouraged by several instructors to sing. Later that year, Gates moved to New York and began singing in clubs for a living. In 1995, Gates recorded his first album, Blue Skies. More recently, Gates recorded two hit albums—The Revolution Will Be Jazz: The Songs of Gil Scott-Heron (2011) and Miles Tones (2012).

“Everything Is Cool is an aesthetic homecoming for Gates. On the album, he pays tribute to the vocalese singers he digs most."

JazzWax clips: Here's the title track ( ), written by Babs Gonzales, with a tenor saxophone solo by the great Grant Stewart (they're joined by John di Martino on piano, Tony Lombardozzi on guitar, Ed Howard on bass and Willard Dyson on drums).

And here's Gonzales's When Lovers They Lose, with another solo by Grant...