Gayle sells a song without having to do the big dramatic stuff. She is a subtler conveyor of story [with] real authenticity. 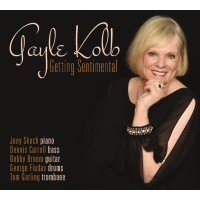 slideshow
With the August 31 release of her debut recording Getting Sentimental, Chicago’s Gayle Kolb makes a triumphant statement in song after a stretch of years away from music. Produced and arranged by acclaimed Chicago bassist Dennis Carroll for JeruJazz Records, the album reveals Kolb’s metamorphosis from a former nightclub headliner in Los Angeles, Las Vegas, and her hometown of Chicago into a compelling jazz artist in full command of her material and her gift.

Kolb will showcase the album on its release date during her Chicago Jazz Festival debut, performing with the same personnel heard on the recording: guitar great Bobby Broom, in whose trio Carroll has been a longtime member; Cleveland piano phenom Joey Skoch; ace trombonist Tom Garling of the Chicago Jazz Orchestra and Chicago Yestet; bassist Dennis Carroll; and the always-in-demand drummer George Fludas.

With her low tones and coolly relaxed phrasing, Kolb never settles for easy emotion. “Gayle sells a song without having to do the big dramatic stuff,” says Carroll. “She is a subtler conveyor of story [with] real authenticity.”

Among the tunes Carroll had Kolb cover was Ray Brown’s rarely heard “Gravy Waltz,” recorded by the Oscar Peterson Trio in the early ’60s and with lyrics by talk show host and jazz pianist Steve Allen. “I had her go toe to toe, back and forth, with [Broom],” says Carroll. “It was real old school.”

Kolb turns in a thoughtful version of “Two for the Road” featuring a smoldering trombone solo, and a bright but pensive reading of Marcos Valle’s “If You Went Away,” performed in a medium-tempo arrangement featuring Skoch on electric piano.

Another highlight is a beautifully restrained rendition of Jimmy Webb’s masterpiece, “Wichita Lineman,” recorded not long after the death of its beloved interpreter, Glen Campbell. Kolb had sung the song early in her career, when she mixed a lot of country and pop into her sets.

Gayle Kolb was born and raised in the southwestern Chicago suburb of Oak Lawn, where her father served as mayor for nearly three decades. She studied piano throughout her childhood, and later sang in the high school choir.

Relocating to Los Angeles in the early 1970s, she met the keyboardist and vocalist Mel Norfleet, who became her mentor and urged her to go hear Lorez Alexandria. Attending a show by the Chicago-born Alexandria, Kolb experienced a kind of epiphany. “Lorez was unbelievable,” she says. “She spoke the lyrics, pronounced them, and you believed every word. I realized that that was what I wanted to learn and accomplish with my music.” Though Kolb did mostly commercial singing during engagements at the Hyatt and Bel-Air hotels, she discovered that when she inserted a jazz classic like “Midnight Sun” into her set, she drew the crowd in. (Kolb has been compared to such cool-school singers as Peggy Lee and June Christie, but says her primary influences were actually Sarah Vaughan, Carmen McRae, and Joe Williams.)

After moving back to Chicago in 1974, Kolb was contracted to work five nights a week in a suburban showroom, a gig that lasted four years and gave her the opportunity to take her show to Las Vegas. Back in the Windy City, she was asked to fill in for Lainie Kazan, the theater and TV star.

Eventually Kolb became fed up with commercial singing and quit the music business to devote herself to her family. She also found satisfying work as an interior designer. But jazz beckoned in the early 2000s. Newly single, Kolb reached out to musician friends and sat in at jam sessions, getting her chops back and learning tunes again. Singing before audiences after all her time away proved “difficult and scary,” she says.

Having seen the highly regarded Carroll in performances in Chicago and admired his work with singers, Kolb called him out of the blue for advice on reentering the music world—or not. “I knew he would tell me the truth about my singing,” she says. “He would tell me if I should go home. I was ready for that.”

During her afternoon “audition” at his house, Carroll had Kolb sing songs at extended lengths and also scat—something she had done very little of. “I wanted to see how much jazz she had in her,” Carroll says. She passed all tests with flying colors, and it didn’t take him long to make a decision. “We can do a CD,” he told her after seven minutes, by his estimation.