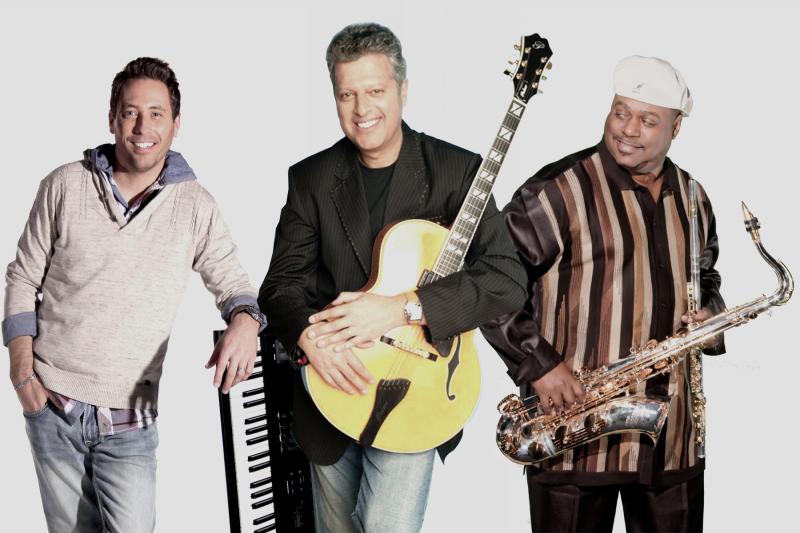 Anchored by veteran contemporary guitarist and Grammy-award-winning producer Paul Brown, The Producers is high-energy jazz. Brown produced the smash-hit Summer Horns album by Dave Koz. Brown’s own latest release, Truth B Told, has soared to the top of the jazz charts. A decade into his solo career, the guitarist sets the bar high for his genre by digging deeper into soul and blues, playing his 1963 Gibson Johnny Smith L-5 edgier and with more abandon.

Nate Harasim, a Grammy nominee and Soul Train Award recipient, is a composer, keyboardist and multi-instrumentalist whose performances have included President Barack Obama’s Inaugural Ball and playing twice at the Dubai International Jazz Festival. The Michigan-based artist’s latest album, Rush, debuted on the Billboard charts at No. 17 and was the No. 6 album of 2011 on SmoothJazz.com.

Rounding out the trio is Saxophonist Deon Yates. No stranger to GRandJazzFest, the Detroit-based artist returns to the Rosa Parks Circle stage as a special guest of The Producers. After going solo in 2009, Yates is fast becoming one of the most sought-after emerging talents in jazz. His chart-topping release Spotlight featured collaborations with Lin Rountree and Nick Colionne. His new project, Saxafaction, produced by Nate Harasim with additional production by Paul Brown, is poised to become the next chart topper from these super producers.

Saxophonist Steve Cole is GRandJazzFest 2015’s Sunday-night headliner. In the 15 years since the release of his debut record, Cole has traveled full circle and arrived back home on Pulse, the 10-song set mixing R&B, contemporary jazz, gospel, blues and pop. The new collection surveying Cole’s musical passions showcases the artist’s affinity for infectious melodies, a wall of horns and soulful grooves.

In keeping with a tradition established with the first GRandJazzFest in 2012, the Grand Rapids Jazz Orchestra with vocalist Edye Evans Hyde opens the 2015 event. For more than 35 years, the Grand Rapids Jazz Orchestra has been one of Michigan’s premier jazz ensembles, featuring some of the finest musicians in the area playing swinging original compositions and arrangements as well as traditional favorites.

Walt Gutowski and The Bridge Street Band returns to GRandJazzFest this year. The popular local band played at the first GRandJazzFest in 2012. Native Grand Rapidian Gutowski has played guitar for years and his band performs at some of West Michigan’s most popular venues.

Mike Frost Project 2.0 is new to the GRandJazzFest stage but no stranger to performing. For more than 30 years, Frost, a saxophonist, has been a prominent performer and bandleader in the Midwest. Hailing from Chicago and now living in Grand Rapids, he’s headlined many world-renowned Chicago jazz clubs as well as other performance spaces and festivals in the Midwest, including Taste of Chicago, The Chicago Jazz Festival, Jazzin’ at The Shedd, The Art Institute of Chicago, The Isthmus Jazz Festival and Days of Wine & Jazz.

Brian Simpson and Jackiem Joyner perform together at the 2015 GRandJazzFest. An inspired keyboardist, composer, prolific studio musician and producer, Simpson is a master of all he purveys. His eloquent approach to playing, sophisticated harmonics sense, bluesy overtones and R&B flavor have made him the go-to man for many, including Janet Jackson, Teena Marie, George Duke, Stanley Clarke and Dave Koz. Saxophonist Joyner is far from complacent in his sound and style. Not afraid to challenge the fan base that took him to No. 1 twice on the Billboard chart, he gets even more adventurous on his fifth album, Evolve.