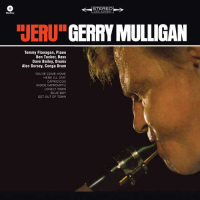 One of the loveliest small-group jazz albums of the early 1960s was Gerry Mulligan's Jeru. Recorded in June 1962 for Columbia, Jeru featured the swinging baritone saxophonist at his tenderest. Produced by the session's drummer, Dave Bailey, a close friend of Mulligan, the album focuses heavily on mid-tempo ballads. Mulligan is backed by a traditional rhythm section plus a conga for color—an unusually straight-up sideman scene for Mulligan in small groups, since he tended to favor instrumental configurations light on rhythm and harmony and heavy on musicians pushed to deliver counterpoint melody lines.

The musicians on Jeru were Gerry Mulligan (bar), Tommy Flanagan (p), Ben Tucker (b), Dave Bailey (d) and Alec Dorsey (cga). The songs were chosen collectively by the session's players, and all are tasteful and unexpected. The recording featured Capricious and Inside Impromptu by pianist Billy Taylor, Cy Coleman's You've Come Home, Kurt Weill's Here I'll Stay, Cole Porter's Get Out of Town, Mulligan's Blue Boy, and Lonely Town by Leonard Bernstein and Adolph Green. It's a relatively short album that could have used four more tunes.

What I love about Jeru is its upbeat, introspective feel. There's plenty of rumination but pressed through a happy filter, resulting in lyrical, thoughtful interpretations. What's more, the sidemen fit together neatly and lift Mulligan's baritone rather than compete with it. Strangely, this is the only album on which Mulligan recorded with Flanagan and, based on the gorgeous results, it would seem odd that he didn't record with him again.