The guitarist's control of pianissimo tone, meticulousness of chordal voicing and delicacy of melodic embellishment represented some of his best work of recent vintage.
—Howard Reich 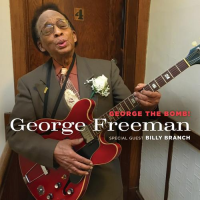 FRIDAY APRIL 26, 2019 from 6 to 9 PM
CD Release and Listening Party at Lange's!
GEORGE THE BOMB!
“Meet and Greet"
George Freeman will be on hand at the bar to sign CDs!
Live Music from John Devlin!

Listen to the New SOUTHPORT CD George The Bomb! all night!

Chicago guitarist and jazz legend George Freeman explodes with his new original songs, tracing his roots back to the Blues! Special Guest Billy Branch on harp and vocals! Drummer-Percussionist Luiz Ewerling and John Devlin on bass & accordion with Joanie Pallatto- vocals and Sparrow-piano!

Guitarist George Freeman turns up the volume in his Chicago living room as he listens to George The Bomb! and he is smiling. He turns 92 on April 10, 2019. He remembers a time when Charlie Parker wouldn't go onstage without him. He is one of the few remaining living musicians who recorded with Bird (An Evening In Chicago Savoy, 1950). The music of George Freeman is not restricted to swing, blues, bop, rock or modern because George has been a living part of all of these eras.

On track #1, “George The Bomb!" harp master extraordinaire Billy Branch sends out a sound that explodes! His sly way of comping on the title track gets the groove rocking and rolling. The surprise here is when Freeman breaks into a full vocal scat! Is it jazz or is it blues? Who cares, it's hot! On track #3, “Where's The Cornbread?" George and Billy have a fun ride with their vocal conversation... “Hey Billy!"—"Yes, George..." To hear Billy Branch sing the blues standard “Help Me", track #5, while showcasing his authentic blues harp alongside Freeman's searing guitar is the breakout culmination of their collaboration.

All of the tracks are original songs by George Freeman, 2019 Porkpie Music BMI (with the exception of “Help Me" by Ralph Bass, Sonny Boy Williamson II, and Willie Dixon (BMI) and “The Music Goes 'Round and Around" by Edward Farley / Michael Riley / Red Hodgson (ASCAP).