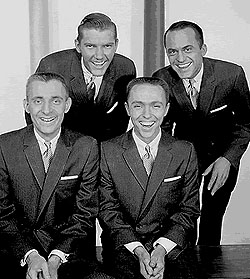 Gene Puerling, leader of the innovative vocal quartet the Hi-Lo's and a noted vocal arranger whose sophisticated harmonies influenced the sound of other groups, including the Beach Boys, died March 25. He was 78.

Puerling, a longtime resident of San Anselmo, Calif., died of complications of diabetes at a Bay Area hospital, said Don Shelton, who was a member of the Hi-Lo's.

Formed in Hollywood in 1953, the Hi-Lo's were “frighteningly talented" and “could flawlessly execute seemingly impossible vocal leaps," according to an appreciation on the website allaboutjazz.com.

Their rich sound sprang from Puerling arrangements that could make other performers swoon. Jazz pianist and TV host Steve Allen is said to have called the Hi-Lo's “the best vocal group of all time." Singer Bing Crosby reportedly said: “These guys are so good they can whisper in harmony."

Puerling “exhumed songs from the past and reinvigorated them," creating “a catalog of grand American standards," Don Gold, a former Downbeat magazine editor, wrote in 2002 in the Chicago Tribune.

One of the Hi-Lo's first recordings, “Georgia," experienced some success, and the group received critical praise for pop renditions of such classic jazz tunes as “Fascinatin' Rhythm" and “Skylark."

Their 1956 album “Suddenly It's the Hi-Lo's" briefly became one of the Top 20 albums and two years later another, “And All That Jazz," was highly praised. Despite being critical favorites, the group never achieved great commercial success.

Clark Burroughs, the tenor whose range as the Hi-Lo's lead vocalist freed Puerling to write daring arrangements, told The Times that Puerling's charts were “complex and hilarious and beautiful -- and difficult. He could make our four voices sound like a brass section."

In addition to Brian Wilson of the Beach Boys, other groups have cited the Hi-Lo's as an influence. They include the Mamas and the Papas, the Gatlin Brothers, Take 6 and Manhattan Transfer, according to biographical sources.

Puerling won a Grammy in 1981 for his arrangement of “A Nightingale Sang in Berkeley Square" for the Manhattan Transfer.

In 1950, he moved to Los Angeles and soon met Burroughs. With baritones Bob Strasen, with whom Puerling sang in Milwaukee, and Bob Morse, they formed the Hi-Lo's, named for the group's vocal range and differences in height. At 5 feet, 7 inches, bass-baritone Puerling was one of the “Lo's." Shelton, a tenor, joined the group after Strasen left in 1959.

In the mid-1950s, the Hi-Lo's toured with Judy Garland. They joined the cast of Rosemary Clooney's syndicated variety show in 1956 and cut an album, “Ring Around the Rosie," with the singer.

Mitch Miller of Columbia Records unsuccessfully pressured Puerling to simplify his arrangements to create a more radio-friendly sound. When Columbia dropped them in 1961, another fan--Frank Sinatra--invited the Hi-Lo's to record for his fledgling Reprise label.

In 1967--with Shelton and singers Bonnie Herman and Len Dresslar--Puerling formed Singers Unlimited and produced advertising jingles. The Chicago-based a cappella vocal group recorded 14 albums, relying on Puerling arrangements that were models of overdubbing, making four voices sound like nearly 30.

“There was only one writer like Gene Puerling," Shelton said. “He was untrained, unschooled but just had this instinct, this unbelievable proclivity for beautiful sounds."

Puerling is survived by his wife, Helen.