Each of the ten songs on Desperado’s Shade bring their own elements to the table, their own emotional connection. 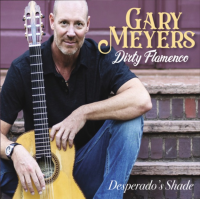 Gary Meyers, the rising flamenco guitarist and performer just released his album Desperado’s Shade, an original collection of flamenco based songs with world music and Spanish rumba stylings weaved into the music. As a self taught guitarist, Gary started playing classic rock riffs at the age of 14. When he heard a rhumba in 2002, he chose to put his electric guitar down and pick up the sounds of flamenco. He studied under the Maestro Rene Heredia—the man credited with bringing flamenco to Colorado in the 1960s.

While there are no lyrics in his music, his blissful and magical guitar playing is what molds each song on Desperado’s Shade. The way he plays the guitar and the way he writes the melodies creates the entrancing music. It’s like the picking of the guitar is the lyrics as he guides us through different journeys through his music. This album’s edgy vibe is the result of a second epiphanic moment—seeing another cruise ship entertainer playing Spanish rhumba with a looper pedal. “At first, I was like ‘you’re cheating,’” Gary recalls, chuckling. “Then I realized the layering possibilities of the pedal.”

Each of the ten songs on Desperado’s Shade bring their own elements to the table, their own emotional connection. While “Cliff’s Edge” takes you to the edge of a cliff, contemplating whether or not to go over the edge, other songs like “Andalusian Trail” take you through the Andalusian wilderness on horseback and “Dancer’s Moon” portrays a couple dancing under the moon’s light. With each song comes a new turn, new twists, and a new narrative.

Flamenco guitarist, composer, and performer Gary Meyers didn’t grow up immersed in the exotic rhythms of Andalusia, but he intuitively taps into the Spanish spirit to perform this storied traditional music with reverence and dazzling virtuosity. The Castle Rock, Colorado-based artist’s story is how a lifelong musician who played Van Halen-style electric guitar heard a friend play flamenco, and then experienced a revelation that sent him on a transformative artistic adventure.

“Flamenco is the sister music of Northern America’s blues—both come from oppressed people. The passion of flamenco is like that of the original blues artists, and, when I first heard it, it touched my soul. There's a lot of struggle and pain in this music, and that melds us together,” Meyers says.

Today, Gary has emerged an in-demand musician, composer, and performer with over a thousand flamenco gigs under his belt, including restaurant residencies, corporate performances, private parties, festivals, weddings, radio and television appearances, wine tastings gigs, art shows, coffee shops, benefits, and hotel performances. He playfully calls his music platform and brand, “Dirty Flamenco,” humbly acknowledging he is a Westerner playing a music near and dear to the heart of Andalusia, Spain, and beyond. Gary performs and records both time-honored, and boldly progressive flamenco styles. To date, under the Dirty Flamenco banner, Gary has released an album of traditional guitar flamenco. His upcoming album, Desperados Shade, is an imaginatively modern Spanish Rumba album a la Jesse Cook and Otmar Leibert.