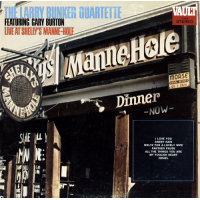 slideshow
As one of Hollywood's most in-demand percussionists, Larry Bunker recorded hundreds of jazz and soundtrack albums. But always as a sideman. Remarkably, Bunker recorded just one album as a leader: Larry Bunker Quartette: Live at Shelly's Manne-Hole, in December 1963. Recorded first and then picked up by the Vault label in Los Angeles in 1965, the album featured Gary Burton (vib), Mike Wofford (p), Bob West (b) and Larry Bunker (d). The sound of these four musicians playing together is exceptional. Gary is in peak form, Wofford has a Bill Evans feel, West's bass is on the money and we get to hear Bunker completely exposed on sticks and brushes.

The album featured I Love You, Sweet Rain, Waltz for Lovely Wife, Panther Pause, All the Things You Are, My Foolish Heart and Israel. Years later in 1990, the Japanese Interplay label released two albums of unissued tracks from the same December 10 and 11 Manne-Hole dates. All of the music is superb. Yesterday, I reached out to Gary to find out more about Bunker and how this session came together:

JazzWax: How did you become friendly with Larry Bunker?

Gary Burton: Larry was one of my dearest friends and influences during the important early years of my career. I can’t remember how we first met, but we really clicked. At one point, he invited me over to his house in Los Angeles. In fact, because I was touring with George Shearing at the time—I was 20 then—I spent a fair amount of time in L.A., either working or between tours since George  lived out there.

JW: Was Larry a good host?

GB: Very much so. Before long, whenever I was in L.A., I stayed at Larry and his wife Lee's home. Larry loaned me his dark green Aston Martin, which I took full advantage of. I enjoyed tooling around L.A., feeling like the king of the road. Larry told me that he and Red Norvo had both bought Aston Martins together on the same day. Some musicians had mentioned that the local dealer was making great offers, and both Larry and Red went to make a purchase.

GB: He was. I did a handful of studio sessions that Larry handed off to me when his schedule was already full. On these sessions, the contractor was looking for someone to play vibes or marimba. Thanks to Larry, I recall doing a session with pianist Martin Denny and another with pianist Roger Williams.

JW: Based on his discography, Bunker seems to have been able to play virtually every percussion instrument one could name.

GB: Yes, but his first love was the drums. He was the most versatile percussionist I ever knew. And he was self-taught. He was widely respected by the Latin percussion folks because he could play so authentically. He also could read music well, which was not true for many drummers. He was always in demand in the recording studios because he could play any percussion instrument. He even played timpani for a summer series with the L.A. Philharmonic one year.

JW: But the drums were his preference.

GB: Yes, he always wanted to play drums more, which led him to two of his more important opportunities: One summer in 1963, Larry got a gig playing drums for TV’s Judy Garland Show at CBS. Mel Torme was the music director and arranger. Larry took me along to a rehearsal and introduced me to Judy as well as to some of the other musicians. That was awesome.

JW: What was the other big opportunity?

GB: A year-long stint playing with Bill Evans. What an experience that must have been. Before Evans, I flew him to New York in August 1963 to record with me and Jim Hall for my Something’s Coming album. He also did a Japan tour with the Stan Getz Quartet when I was in the band in 1965. And I brought him back to New York to record The Time Machine with me in 1966.

JW: So how did Bunker come to lead a quartet at Shelly’s Manne-Hole?

GB: Larry got the idea for us to put together a quartet and play some one-nighter gigs whenever I had free time in L.A. We always played at Shelly’s Manne-Hole, the club owned by drummer Shelly Manne. I would later play there with Stan Getz and eventually with my own band during the 15 or so years the club was in business.

JW: Who picked the pianist and bassist?

GB: Larry recommended Bobby West on bass and San Diego pianist Mike Wofford (above). We played three or four of these Manne-Hole dates. By then, the group sounded pretty good and we had sort of developed a repertoire. So Larry suggested we make a record. The plan was to hire the best remote recording company at the time—Wally Heider Studios—to record two nights of the band live at Shelly’s. Legendary engineer Bones Howe was hired to man the controls. We were all excited about it.

JW: A rather interesting bunch of of weeks in U.S. history, yes?

GB: Astonishing. Early one morning when I was staying at Larry’s house in late November, his wife, Lee, rushed into the den, which served as my room when I visited. She woke me up to turn on the TV. A neighbor had called to say that President Kennedy had been shot. We watched the coverage awe-struck like everyone else in the world.

JW: Did that delay the recording at the Manne-Hole?

GB: On November 22, our recording dates were still a couple of weeks away. We assumed the period of mourning would be over by then. Life in L.A. did slowly return to normal as the days passed. Finally, our first date arrived on December 10. We showed up early at the club for a microphone check. We were very excited about what was to come that night. We had become quite proud of our little band.

JW: Had the Manne-Hole been open during the weeks after the assassination?

GB: No, this was the first night for Shelly’s to reopen. But we had misjudged. By 9 p.m., not a single customer had come in. Clearly the public was not yet ready to go out for a night of jazz. We decided we’d just go ahead and record anyway, without an audience, and treat the session like a studio recording.

JW: How did it work out?

GB: We started into our first song and everything was going great. Then an older fellow with a big bag of groceries happened to walk by the club. Hearing the music, he wandered in and took a seat with his groceries a few rows back from the bandstand. He soon realized we were recording and that he was the only audience member. So, he started applauding wildly after every solo and every song.

JW: What did you do?

GB: We didn’t know what to do. It seemed wrong to tell him he couldn’t applaud. But we couldn’t put out a record with the sound of only one person clapping. We had a quick conference and admitted that we were totally uninspired anyway due to the total lack of fans to cheer us on. We played some more and called it an early night.

GB: The next morning, we got on the phone and called every friend we knew in L.A. and invited them to the club that night. So, on night two, Shelly’s Manne-Hole was packed with friends and the occasional celebrity. We recorded the whole album that night.

JW: So the “unissued” material released years later in Japan came from the 10th or the 11th?

GB: We may have recorded during the afternoon soundcheck on the 10th. The other tracks are probably from that evening, with more clapping added. My memory isn’t clear about that.

JW: How did you find a label?

GB: Once we had the music recorded, our next challenge was find a label to take the project. Although a legend in the Hollywood movie and recording scenes, Larry was still little known to the jazz world as a name. After a couple years of shopping around the tapes, a small new label called Vault decided to release it in '65. The album has been re-released a couple of times by other companies.

JW: The album brings back a lot of memories for you, doesn’t it?

GB: Yes, during that period of my career, I learned so much and grew as a musician. I was fortunate to become friends with people like Larry and others, who were so encouraging.

JW: When did you last see Bunker?

GB:I was at a Grammy telecast in L.A. in 2000. I was nominated for a Grammy that year and was seated in a special section near the front. I showed up early with my friends, and there was Larry playing in the orchestra. When they took a break, he saw me and came over to talk for a bit. Lucky me, I won my fifth Grammy that night for Like Minds.

JW: What was going through your mind?

GB: I thought how nice it was that Larry, who had been such a great help to me early on, was there to see me win. Larry was always a great guy. He was highly educated and very calm and good-natured. Most of the musicians in town were in awe of him, both for his talent and his solid personality. You’re right that jazz accounted for maybe just 20% of his recording and performing output. He was considered a god in the L.A. studio scene. In his later years, he almost exclusively worked on movie projects, which tended to be higher quality music than, say, pop recording sessions.

As for the unissued material released in Japan, Vol. 1 is here and Vol. 2 is here.