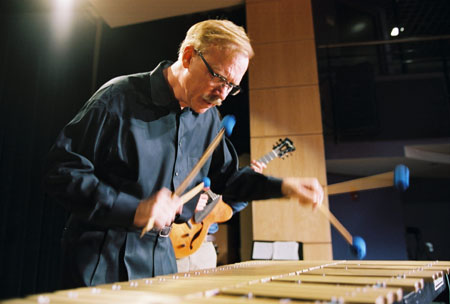 slideshow
Boston, MA. - 2015—Grammy-winning vibraphonist Gary Burton, jazz pianist and composer Fred Hersch, and others will perform a concert of Ukrainian folk music as an expression of solidarity with Ukrainian refugees Wednesday, June 10, at the Berklee Performance Center.

The concert is presented in partnership with the UN Refugee Agency (UNHCR). Ned McNeal, UNHCR Associate Director of Development, will speak briefly at the concert about the agency's efforts in Ukraine. People are encouraged to make a gift in support of Ukrainian refugees at unrefugees.org.

“In my worst nightmares I couldn’t imagine anything close to what has happened. Whole cities are destroyed, thousands of people killed,” said Neselovskyi, shaken by the humanitarian crisis in his home country. Looking for a positive way to respond, he contacted the UNHCR about setting up a concert to support the hundreds of thousands of refugees displaced by the conflict.

Once Berklee agreed to host the concert, he wrote to Burton, his longtime friend and mentor, and asked him to perform. “I was deeply moved when Gary said he would make the trip to Boston for this," said Neselovskyi. Hersch, who produced Neselovskyi’s 2013 album, Music for September, and whose family has Eastern European roots, was sympathetic to the project and also eager to participate.

He later approached Karam about having her student choir Pletenitsa sing arrangements of Ukrainian folk songs. “It’s very special to hear Ukrainian folk music sung by students from places as diverse as Chile, Bulgaria, Norway, and Lebanon,” said Neselovskyi. “It sends a very powerful message about people coming together.” Ensemble singing in three- and four-part harmony is a defining feature of Ukrainian folk music, Neselovskyi explains. Because the Orthodox Christian church didn’t allow keyboard instruments to be used in religious service, Ukraine and Russia developed a rich tradition of a cappella singing.

Concert for the Ukrainian People takes place Wednesday, June 10, at 8:00 p.m., at the Berklee Performance Center, located at 136 Massachusetts Avenue, Boston. Tickets are $12 and $24, and available at berklee.edu/bpc, by calling 617-747-2261, or at the BPC box office. The venue is wheelchair accessible. Steam the concert live at concertwindow.com.