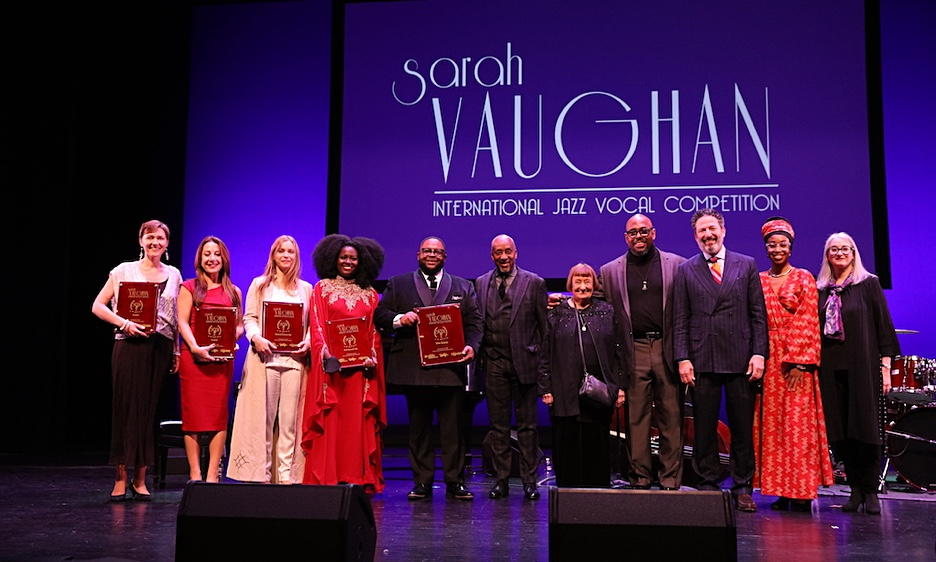 By
November 16, 2021
Sign in to view read count
At a star-studded, sold-out performance held yesterday afternoon on the NJPAC stage, G. Thomas Allen (Chicago, IL) was announced the winner of the 10th Annual Sarah Vaughan International Jazz Vocal Competition. This marks the first time a male vocalist won the contest. Hosted by NJPAC’s Jazz Advisor and multi-Grammy-winning bassist Christian McBride, “The SASSY Awards” featured performances by the competition’s five finalists as well as a special appearance by one of today’s top jazz vocalists, Dianne Reeves.

The contenders took to the stage with magnificent performances in front of a live audience. Winner G. Thomas Allen wowed the esteemed panel of judges with his rendition of “Misty”, a standard recorded by Sarah Vaughan in 1964. Andrea Miller (Costa Mesa, California) performed her rendition of “Bye Bye Blackbird”, April May Webb (Edison, NJ) sang “Social Call”, Latvian-born Arta Jēkabsone (Jersey City, NJ) sang “Gone with the Wind”, and Vik Gečytė (Paris, France) performed her rendition of “Lover Come Back to Me”.

As the first-prize winner of the SASSY Awards, G. Thomas Allen received a $5,000 cash award. April May Webb, who was the runner-up, was awarded a $1,500 cash prize, and third place recipient Arta Jēkabsone won $500.

The competition recalls the humble beginnings of legendary jazz singer/NEA Jazz Master Sarah Vaughan (1924-1990) who, back in 1942, was a Newark teenager and winner of an amateur singing contest at the Apollo Theater. That memorable night helped launch the lifework of one of the most successful, influential jazz vocalists in the history of American music. The competition is also known as The Sassy Awards, a nod to the nickname of singer. Past winners include Cyrille Aimee, Jazzmeia Horn, Ashleigh Smith, Arianna Neikrug, Deelee Dubé, Quiana Lynell, Laurin Talese, Samara Joy 2, Gabrielle Cavassa and Tawanda Suessbrich-Joaquim. What has become one of the top annual vocal competitions in jazz, The SASSY Awards offers outstanding jazz singers a one-of-a-kind platform for embarking on a career in the music business—and offers audience members a chance to discover the jazz stars of tomorrow. Gifted young contestants from around the world are evaluated on vocal quality, musicality, technique, performance, individuality, artistic interpretation, and ability to swing.

Vocalist, composer, and music educator G. Thomas Allen is known for his remarkable vocal flexibility, warm timbre and cross-genre experimentation. He has worked with the late David Baker and the Smithsonian Jazz Masterworks Orchestra, performing Duke Ellington’s: Sacred Concerts at the Strathmore Hall, and has shared the stage with influencers such as Bobby Broom, Pharez Whitted and Dennis Luxion. As bandleader, he released his debut self-titled album in 2020, which hit No. #1 of the iTunes jazz charts. Thomas is a two-time graduate of Morgan State University, with degrees in Vocal Performance and Speech Communication. He currently serves as the Jazz and Contemporary Voice Instructor at ChiArts and on the voice faculty of Columbia College Chicago (CCC).

A world of entertainment just minutes from home, New Jersey Performing Arts Center (NJPAC), located in downtown Newark, N.J., is America’s most diverse performing arts center, and the artistic, cultural, educational and civic center of New Jersey—where great performances and events enhance and transform lives every day. NJPAC brings diverse communities together, providing access to all and showcasing the state’s and the world’s best artists while acting as a leading catalyst in the revitalization of its home city. Through its extensive Arts Education programs, NJPAC is shaping the next generation of artists and arts enthusiasts. NJPAC has attracted nearly 10 million visitors (including over 1.7 million children) since opening its doors in 1997, and nurtures meaningful and lasting relationships with each of its constituents.