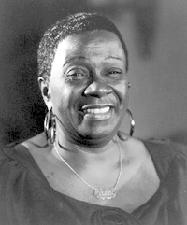 slideshow
Irene Reid
Funeral Services:
This Thursday: January 10th, 2008
The Greater Zion Hill Baptist Church
at 127th and 8th Avenue
Time: Viewing from 2-6:30
Services from 6:30 on at the church


Irene Reid
The last of a dying breed. One of the greatest singers that ever graced Harlem.

Friday January 4th Legend/vocalist Irene Reid, one of the greatest vocalists that ever graced a stage, has passed.

It was the same day as most of you already know, that Earl May (Legendary bassist) also passed at 4 PM- without any warning, he went almost instantly, without suffering, survived by his wonderful wife Lee. Arrangements and funeral services will be announced soon and certainly someone with more jazz history than I, will write about the one and only Earl May, one of the kindest, generous, most precious people in the world- but in the mean time- here's a little something about Irene.

First time I went to see Irene Reid, was when her health first was failing (over 5 years ago) and she was only able to sing 3 tunes in a set. I was young in my job at the Jazz Foundation and some folks told me that Irene had not been feeling well so I went to hear her at “Smoke" on Broadway and 106 St. and I introduced myself.

I watched her perform 2 sets. You could see he was struggling with her breathing and the club owner Paul had asked her if she needs to go to the hospital but she didn't want to disappoint the crowd that had packed the place waiting in line to see what was becoming rare moments when she was feeling well enough to make the gig. At one point, she was so dizzy she nearly fainted but no one in the audience saw this going on as she had been experiencing this in a small corner that had been set aside for her to rest between tunes. Irene insisted she would not leave till she finished the second set. She saved herself for the last tune of the set, a grand finale blues. That was when I first heard Irene Reid do what so few left on Earth can do anymore- I had to literally sit on my hands to keep from pulling out a harmonica and jumping on the stage- I had not heard blues like that in ages. For the length of that one tune, not one person in the crowd remembered that they were dealing with a divorce, or an illness or the sickness of a parent, or the heartbreak of having a teenage kid at home - no one in that room remembered they had to go to work on Monday to a job they didn't want, or their life was not what quite what they had expected- for one moment, we were all free- we were complete, we were all happy and shouting from the irreplaceable irresistible reach-your-soul abilities of Irene Reid - After she finished, and everyone was on their feet standing up for her, she made her way through the crowd and asked me to help her into the car service that was waiting and we went straight to the hospital. That was the first night I had met her. We went to a hospital in the Bronx and when we got there, all they saw was an elderly person they assumed was poor, they said there were no beds and made us wait by the door, cold winds passing through us, surrounded by homeless people who were coughing and the staff had that attitude that many of us have experienced in situations like this one.

So I went up to the head nurse and said, “Do you know who this is? She's a very famous singer." Then I went outside for a minute and made a call to the emergency room as if I was the assistant of a very famous person who I wont name, (but who gave me permission to do this) and asked if Miss Irene Reid was in the emergency room and said that “Mr. So and so was worried about her and wanted to know if she was all right." We got a bed within 2 minutes and the head doctor came out and she was treated like the royalty she was.

Sadly, she was not able to sing much after her health started to fail her more and more. Irene had not been able to sing in any meaningful way these past few years and every time we'd speak, she would be going into the hospital or going home from the hospital. Our social worker Valerie Simon, who also loved her and was very close to her, had gotten her a special grant that paid her rent during the last few years of her life while she was homebound.

Sometimes she would be feeling so ill she could hardly stay on the phone but she never complained, she always remembered to ask how I was and how my children were and how the folks she knew were doing. Always she would sigh and just say, “it doesn't help to boo hoo about it" and then sometimes we would just stay silent knowing there was nothing much to be done but wait till the next doctor appointment just to be told nothing could really be done.

On New Year's Day I went to see her- she said she was really feeling bad and I brought along a new poodle puppy I had just gotten, knowing she missed having hers- When I walked into her room with the puppy, she had a huge smile on her face and looked as beautiful as she had when I first met her.

She said to me, “Wendy, it's too much, I feel so ill all the time, I can't do anything anymore, it's just too much." I held her and kissed her head and I had the feeling it might be the last time I got to do that. I felt such a feeling of love and sadness come over me, and I wished this wonderful, kind and caring woman some peace.

For someone like Irene, who was so filled up with the Music, not being able to give it or get it- was unimaginable and when Dr. Billy Taylor called me on Friday night with the news, I started to cry but then I was actually relieved.

Irene is now as free as her music made us- no more waiting, no more suffering. There are few people that are so filled with that much music, but it will be enough to fly her all the way to Heaven.

With Love and sadness,
Wendy


Irene's Bio:
Jazz vocalist Irene Reid first rose to prominence in the 1960s before mounting a surprising comeback in the late '90s. During the '60s, she recorded for some of the era's most prestigious jazz labels, including Verve (Room for One More, 1965; It's Too Late, 1966). However, in the '70s, she disappeared from the spotlight after recording an album for Polydor, The World Needs What I Need (1971). It wasn't until the late '90s that she returned to prominence, recording some albums for Savant, beginning with Million Dollar Secret (1997).

The really great jazz vocalists share something in common with their renowned instrumental counterparts. That is, they possess a truly identifiable sound and approach that cannot be mistaken for another. For just two examples, any jazz fan worth their weight could identify Frank Sinatra or Dinah Washington in a mere few notes. Truth is though, there were many vocal artists in the '50s and '60s that never obtained star status but certainly qualified as being individualists with something important to say. When Norman Granz started recording jazz on his Clef label in the mid '40s; it would be such vociferous jazzmen as Illinois Jacquet, Gene Krupa, and Lionel Hampton that would become his source of pleasure. Only after the Verve imprimatur debuted in 1956 did Granz add some vocal talent to the roster in the guise of the legendary Ella Fitzgerald. During the '60s when Creed Taylor would take the helm of artist management, an even more impressive line-up of vocal talent would be added to the catalog. Anita O'Day, Astrud Gilberto, Susan Rafey, Jackie & Roy, Jacy Parker, Pat Thomas, and Irene Reid are just a few of the names that come from this era.

In the spotlight for our purposes this time around is the outstanding Irene Reid, still active and recording these days. Back in 1965, Reid was just in the process of making a name for herself and had appeared on two tracks of Lalo Schifrin's Once a Thief album. Her own Verve debut, Room For One More puts her in front of a large ensemble arranged and conducted by Oliver Nelson and the results are uniformly excellent. Typical for the time, the musicians assembled for the festivities are nothing short of being the pick of the litter- Charlie Mariano, Jerome Richardson, Phil Woods, Jerry Dodgion, Thad Jones, Joe Newman, Jimmy Cleveland, Urbie Green, and J.J. Johnson. Tasteful and supportive, the rhythm section includes Kenny Burrell, Bob Cranshaw, Roger Kellaway, and Grady Tate.

Two Buddy Johnson classics are featured among a memorable program. Both “Save Your Love For Me" and “I Wonder Where Our Love Has Gone" find Reid belting out an emotionally charged message with perfect intonation and just the right touch of reverb provided by the eminent Rudy Van Gelder. Nelson's resonant charts never get in the way, but create the perfect environment for Reid to strut her stuff. “Who Can I Turn To" gets a definitive performance as Reid flaunts her way with a ballad, the final cadenza displaying her great range and a penchant for creating those goose bumps. On a lighter note, the theme from “Bewitched" takes a bow with lyrics and a delectable arrangement that swings merrily.