Friends, Colleagues And Students To Celebrate Janet Lawson In NYC on May 15th 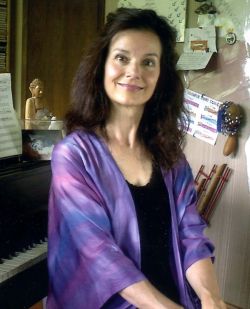 Friends, current and former students, and many of the incredible musicians she has collaborated with over the years will gather on Monday, May 15th 2017 from 7 to 10pm at the extraordinary Minnie Petrie Synagogue at Hebrew Union College- Jewish Institute of Religion, 1 West 4th St. (near Broadway) in New York City, to offer a loving, healing tribute to Janet in celebration of her incredible impact on so many artists and students of jazz.

Engaged in a health crisis, Janet is leaving NYC to live with family in Baltimore.

Born in Baltimore to a family of professional musicians, Grammy-nominated jazz vocalist Janet Lawson, who is profiled in the New Grove Dictionary of Jazz, All Music Guide To Jazz, Leslie Gourse's Louis' Children, and Scott Yanow's The Jazz Singers: The Ultimate Guide, made her singing debut at the age of three and in her teens performed with big bands. After moving to New York, she began her studies with distinguished composer/arranger Hall Overton and made her debut appearance at the Village Vanguard with the Art Farmer Quartet. Throughout her career she has appeared with, among other jazz greats, Duke Ellington, Tommy Flanagan, Joe Newman, Barney Kessel, Milt Hinton, Ron Carter, Barry Harris, Dave Liebman, David and Lida Baker, Rufus Reid, Clark Terry, Billy Higgins, Cedar Walton, and Bob Dorough.

Special Thanks to Toni Ballard, Carolina Gonzalez-Mama, JW Peine and The Jazz Church of Houston.

Photo I.D. will be required for admittance; bags may be searched.