The ensemble will be performing selections from their extensive catalog including Emehntehtt-Ré and Slag Tanz. 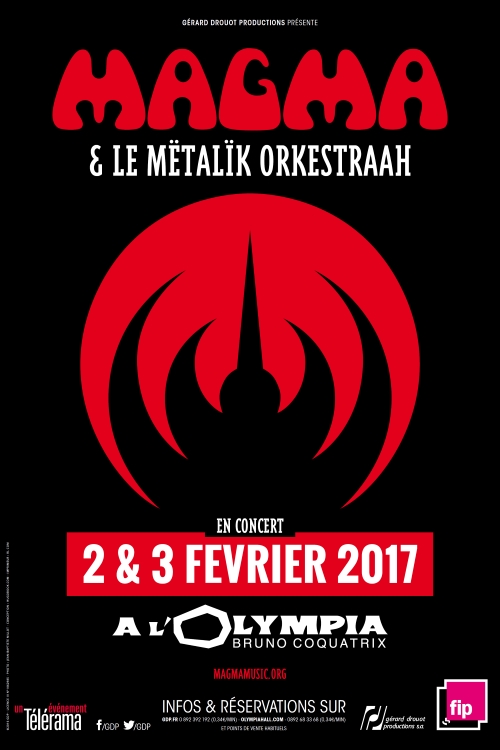 slideshow
Bands and trends might come and go, but some of it is meant to stay. Far beyond a mere jolt to the music world or a fad phenomenon, Magma imposed themselves as early as the 1970's thanks to their unconventional and cliché-free approach to music. An unparalleled music, which is as violent as it is clever. Founded by drummer and singer Christian Vander, the band quickly set itself apart from its contemporaries through heavy and ruthless polyrhythmic beats. With a wide range of contemporary musical greats at his side, Vander remains a fine mentor from the likes of Miles Davis.

Since its reunion in 1996, the band has gone on several tours, always followed by its ever-growing and loyal fan base, and attracting an increasingly young audience! The cult band celebrated its 40th anniversary with the release of two Classical influenced bright new albums in 2009 and 2012. For their 45th anniversary, Magma is back with two new opuses respectively titled Riah Sahiltaahk and Slag Tanz, as well as a vinyl reissue of their whole discography. Since 2015, the band has been on a worldwide tour called “Le Tour Sans Fin." Magma's music is timeless.

At the Olympia, Magma will be supported by the Mëtalïk Orkestra, a new creation project. The ensemble will be performing selections from their extensive catalog including Emehntehtt-Ré and Slag Tanz. The orchestra is composed by 27 CMDL students (Didier Lockwood’s music school) and from the PSPBB of Paris.

Magma in concert on February 2nd and 3rd at the Olympia in Paris.