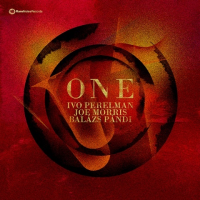 AVAILABLE IN STORES AND ONLINE OCTOBER 1ST, 2013 AND THROUGH RARE NOISE RECORDS ON CD, VINYL AND HI-RES DIGITAL DOWNLOAD.

One brings together the potent forces of Brazilian tenor saxophonist and prolific free jazz icon Ivo Perelman, veteran bassist-guitarist Joe Morris (a ubiquitous figure on the avant-garde jazz scene, making his recorded debut on electric bass guitar here) and Hungarian hardcore drummer Balazs Pandi (Slobber Pup, Obake, Metallic Taste of Blood, Merzbow). With no rehearsals, no charts, no sketches or musical road maps whatsoever, the three risk-taking musicians entered the studio and made a joyful noise in daring, unadulterated fashion, pulling no punches while following their instincts from start to finish. Fueled by the hard and fast beats of Pandi, who also demonstrates his remarkably versatile skills and keen listening instincts throughout the session, One is a highly interactive studio encounter that borders on the telepathic at times. And with Perelman’s cathartic, Albert Ayler-inspired tenor sax blowing on top and Morris’ electric bass lines bubbling underneath, sparks ensue on this turbulent project.

From the opening strains of the kinetic and aptly-titled “Freedom,” which kicks off the potent improv outing, to the dynamic 17-minute closer “Stigma,” it is clear that these three kindred spirits are going for it with reckless abandon. Along with the blowtorch intensity of Perelman’s sax playing and Pandi’s thunderous drumming, there are moments of tender reflection on One.

“What Love Can Lead To” has Pandi playing in more understated fashion on mallets while Perelman pursues a poignant, searching melody. “To Remember What Never Existed” builds from a lightly swinging intro to a tumultuous crescendo capped by Ivo’s mighty overblowing and Balazs’ bashing. The title track is an intimate, conversational duet that has Morris playing contrapuntal bass guitar lines to Perelman’s angular and skittish sax lines. “Universal Truth,” a frantic barrage fueled by Pandi’s dynamic polyrhythmic pulse and Morris’ bubbling bass lines, comes across like Ivo’s white-hot homage to Albert Ayler. And the visceral, suite-like closer, “Stigma,” travels across a myriad of moods while serving as a perfect microcosm of what these three such potent forces can do together.

While Perelman, Morris and Pandi had all previously recorded before (Perelman most recently on two trio projects with drummer Gerald Cleaver for Leo Records – 2012’s Family Ties and Living Jelly) and Morris had previously played with Pandi in Slobber Pup (on their 2013 debut Black Aces for RareNoise Records), One marks the first time that Ivo and Balazs had ever played together. “Balazs clearly comes from a rock or hardcore background,” says Perelman, “but you can still hear some Elvin Jones in his playing, which I really love. So the idea of playing with Pandi was very exciting to me.”

At Pandi’s invitation, Perelman came down to The Stone, John Zorn’s experimental music club on Manhattan’s Lower East Side, to hear the drummer play with Slobber Pup, a thunderously intense band featuring Morris on distortion-laced guitar, Trevor Dunn on electric bass and Jamie Saft on keyboards. “I totally enjoyed Balazs’ playing, although I had to cover my ears at times because I wasn’t used to hearing such intense music. And as I watched them I thought that if we played together it would sound great with Joe on electric bass, just to give it that punch to match Balazs’ intense backbeats.”

As Pandi recalls of that first encounter with Perelmen, “After the show at The Stone, Ivo ran up screaming and told me pretty much that I can’t leave the States without us recording. Within three days, we were in the studio.”

And so, a power trio was born. They went into the studio carte blanche and pressed the record button. And the result is One. What you hear is what they played that day in the studio. “This has pretty much been the way on mostly all the recordings I have done,” says Ivo. “I really like not playing with a particular person before I go into the studio because I want the first reaction to be documented right there, right then.”

While Perelman was well aware of Pandi’s thunderous nature, he was not surprised by the sheer versatility the drummer exhibited from track to track on One. “I wasn’t surprised by the quality of his other kind of playing because I could tell he was a sensitive listener and would adapt to the environment and bring something tasteful to the plate.” Adds the Hungarian drummer. “Playing lightly is nothing new to me. I used to play timpani in an orchestra when I was nine years old, so I grew up dealing with all kinds of tempos and dynamics and playing, from playing solo to playing with up to 60 musicians. People know me more from playing intense and loud music, but in the end my goal is not to kill anyone at the session or to be the most intense performer ever. Also, it is possible to play heavy music with light dynamics. Sun Ra is the best example of this. So it is possible to play at a lower dynamic but still destroy.”

Balazs is definitely a unique drummer,” adds Perelman. “I don’t even know how to name what he does because it’s so unique, but I definitely never played with anybody with that intensity, really. When I played with Rashied Ali, to me that was beautiful and very intense. But Balazs has something unique. So he forces me to play in a different way as well.” Morris concurs. “Balazs does a lot of different things. He’s somebody who has a rock and metal sort of feel, this sort of head-banging kind of thing, but he has incredible ears and really good technique and he’s very pliable and flexible. So he’s really easy to play with. And I think Ivo was blown away at how different it was and yet how good it was.”

Though Perelman has amassed an extensive catalog of free jazz recordings over the years, he says it is never easy to remain in that place of pure improvisation. “Easy is never a good word, I think, because every day it’s a different set of parameters. You’re dealing with the situation, whether it’s studio or live, the psychological, the social, the spiritual. So many factors play into this so every day is a challenge to say something meaningful, fresh, honest and good. So it wasn’t easy improvising with Joe but it was familiar in the sense that I relate to him in a beautiful way. He’s a keen listener and he gives me back ideas, so it’s a back-and-forth type mutual collaboration. And now I feel like I’m developing that same kind of communication with Balazs. So I’m looking forward to collaborating with him again to see if we can take it to the next level.

Ivo adds that he was pleasantly surprised by the results of Morris’ first-time use of electric bass guitar on One: “I’ve played and recorded with Joe both on acoustic bass and electric guitar. And for me, the electric bass is like a great mixture of both. So on this recording I got a bit of his ‘bass thinking hat’ and I got a bit of his ‘guitar playing hat.’ I really dug that and I have a feeling that Joe will expand and be asked to play electric bass guitar more and more when people hear what I’m hearing. This is the beginning of a new language for him, a new axe. Between the chording, the things he does with his pick, the nuances and speed he can generate on the instrument…I don’t hear electric bass players doing that. So I think Joe bumped into something great. I’m happy that I brought it up to him.”

Says Morris, “I had never done a gig on electric bass before. I do play bass and I’ve done a lot of gigs and records on upright bass. And I’ve played electric bass at home but I’ve never done any kind of performance on electric bass. So this was the first one that I did. In fact, I had to borrow my son’s Fender Jazz bass for this session. And for a while I was thinking about being a bassist on it but then I started thinking, ‘Well, it’s really a bass guitar.’ So at that point in the session I sort of shifted to being a guitarist and just thinking of it as being a bass guitarist. And that’s when it sort of went to a different place because that realization gave me an opportunity to shape the form a little bit differently.”

With the release of the powerhouse triumvirate’s One, Perelman, Morris and Pandi are poised to destroy. And each night that they play together on tour to promote their RareNoise debut, it’s bound to be a new and different and undeniably intense experience. As Morris put it, “Every time I pick up my instrument, whether it’s the guitar, upright bass or electric bass, it’s my obligation to do something different than what I did last night. And it’s great when you play with people like Ivo and Balazs, who both have the same attitude. They’re both seem to be innate musicians who have tons of energy, who are great listeners and who don’t get stuck because they can change and go with the flow. They’re great improvisers. And together, we have something real special.”

The three master improvisers will have their stateside debut in December at Shapeshifter Lab in Brooklyn.

RareNoise Records was founded in late 2008 by two Italians, guitarist/arranger/ producer Eraldo Bernocchi and all-round music nut Giacomo Bruzzo. Located in London, the label was created to present a platform to musicians and listeners alike who think beyond musical boundaries of genre.