Frankie Trumbauer and Me 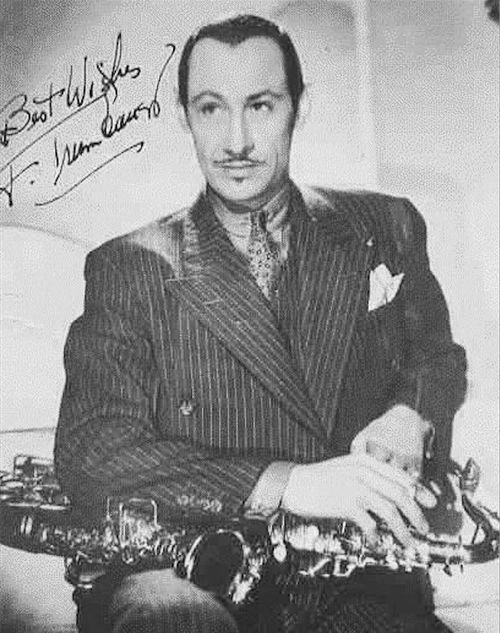 slideshow
The jazz saxophone starts with Frankie Trumbauer in the 1920s. All of the greats of the 1930s and '40s were fans, including Lester Young. In addition to playing C-melody saxophone (between the tenor and alto in size) and recording with Jean Goldkette, Red Nichols, Paul Whiteman, and Bix Beiderbecke, Trumbauer was a skilled pilot who joined the Civil Aeronautics Authority (CAA) and was a test pilot during World War II, training crews in the operation of the B-25 bomber.

“My father, W. Laurence Geis, had a high school band in the 1920s and after college in Sioux Falls, S.D., he took several of the band members out on the road. Lawrence Welk and some polka bands toured the Midwest then. Welk always reminded his band members to buy a loaf of bread on Saturdays, since the Blue Laws closed everything down on Sundays. Sometimes they got stiffed after their Saturday night gigs. Dad didn't want to put his players through this, so he broke up the band and took a job in Omaha.

“After the 1929 stock market crash, dad lost his job and returned to Sioux Falls. I was born shortly after, and dad went to work as a truck driver for Kroger, a grocery chain, while he searched for a better-paying job. He also taught piano and violin privately in our home. Soon he landed a job teaching radio operation and theory (dad was a ham radio operator) to men in a Civilian Conservation Corps (CCC) camp based in Chamberlain, S.D. Many of his students went into the military or the Merchant Marine Corp during World War II. From his job with the CCC, my dad went into the CAA in 1940, which is where he met Frankie Trumbauer.

“After the war, when I turned 17, I worked in the ground crew of the CAA headquartered in Kansas City, Missouri. We had just installed an instrument landing system in Lincoln, Neb., and the CAA's Twin Beeches [Beechcraft Model 18] and DC3s were equipped with recording equipment operated from the co-pilot's position. The recorder had a strip chart that ticked out the necessary data for landing.

“One day I flew with Trumbauer in a Twin Beech. After taking off, we sensed trouble and radioed the tower for a visual. They confirmed that our right landing gear had not locked into place. So we flew around and hit the runway hard on the left wheel to try and jar it down. That didn't  work. We tried again but without success. As we came around, I could see the hanger doors opening and the red fire trucks emerging.

“I asked Trumbauer what his plan was. He said that we'd try it one more time and if the gear didn't drop and lock, we would come in on the left landing gear only and do a ground loop—or we could pull up the left gear and do a belly landing in the grass. Either would have been dangerous with aviation fuel aboard. We had no choice but to stay with the plane; there were no parachutes.

“The third time we hit the runway hard, the right-side gear dropped. We lifted up and flew around to test the right landing gear and it held as we landed. Trumbauer had saved our lives. He and I parted, never to see one another again." Trumbauer died in 1956 at age 55.

Here's Frankie Trumbauer with Bix Beiderbecke on Singin' the Blues from 1927...