Fantastic musicianship, melodic compositions that push the envelope just the right amount, and a production quality that makes you want to listen over and over.
&#151Dave Koz, Saxophonist 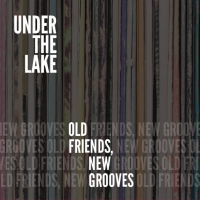 Hot off the success of their 2020 Smoothjazz.com Top 100 release “Your Horizon Too”, Under The Lake released their current collection of 11 all-new, original tracks entitled Old Friends, New Grooves in July on the Mind In Overdrive label. Bassist Nathan Brown, drummer Richard Sellers, guitarist Patrick Yandall and saxophonist Quintin Gerard W. joined keyboardist / composer Jayson Tipp again for this effort recorded during the COVID shutdown. Now that collection of tracks and their performance have landed Under The Lake on the Official Ballot for this year's GRAMMY Awards by The Recording Academy in two categories:

Old Friends, New Grooves by Under the Lake

“7AM Flight Home" by Under the Lake

For bandleader Tipp, the shutdown began on March 12, 2020 after nine months of flying across the country on a weekly basis with a “7 AM Flight Home” from Los Angeles to Portland: “As is the case is occasionally when I have time alone to think, I had a musical idea; a portion of a melody line that came to me on that flight. I sang the line into the voice recorder on my phone. That weekend I pulled up the recording, transcribed and then recorded a brief version of the melody. That melody later became the song named for the flight.”

The album, Old Friends, New Grooveswhich kicks off with “7AM Flight Home”, an upbeat, syncopated track marked by the interplay of guitar and saxophone and featuring an almost haunting solo by bassist Nathan Brown. but the journey continues to document the 2020 COVID experience with “Whatever You Wish For”, a mellow, groove-driven track with clear soul references. That brings us to the “Last Day of March” with a bouncy, rubbery bass line below a Bob James-influenced electric piano melody. “Can’t Believe It’s True” takes you on a ride led by Patrick Yandall’s clean guitar lines. If you listen carefully you’ll hear where the lyrics “Have I Told You?” might have been sung over the chorus of this upbeat tune punctuated by percussion. “Lazy Saturday” is the right track for just hanging out moving from funky keyboards to soulful guitar and saxophone passages. “Around The Block” supports unison sax and guitar melodies with syncopated rhythms and a solid Hammond B3 organ vibe bringing us back home in time for “Another Mothers Day”, a band favorite that combines 6/8 timing and floating soprano saxophone. With those diversions out of the way, we’re ready “When Autumn Comes” to drop an acoustic guitar-driven soundtrack- you can almost hear the rain. A testament to the diversity of the ideas and performances on this album “Silver Lining” lays down a Philly soul-influenced 6/8 memory of good things coming from bad. The collection culminates with the title track “Old Friends, New Grooves” acknowledging this unit’s staying power across the years and music.

The album has already gained Under The Lake slots on various charts from Smoothjazz.com, Radiowave and Groovejazz as well as critical praise from the likes of Dave Koz who commented: “Kudos to Under The Lake for making such a listenable album top to bottom…and doing it all under the umbrella of Covid, no less! Fantastic musicianship, melodic compositions that push the envelope just the right amount, and a production quality that makes you want to listen over and over. It’s a well done album indeed."

Tipp says: “We really enjoyed making this album and think it's some of our best work. It’s an honor to be placed on the ballot and have the support of so many fans. We know it will be a climb to get into the Final Top 5 Nominees and appreciate everyone's support." If you are a voting member of the Grammys, consider Under The Lake for these two categories:

Old Friends, New Grooves by Under the Lake

“7AM Flight Home" by Under the Lake

About Under The Lake