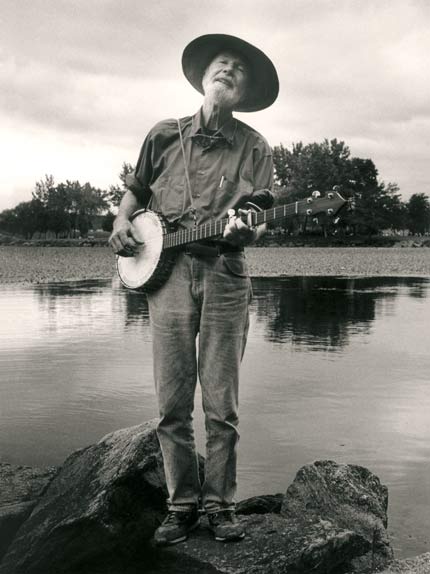 slideshow
Pete Seeger, a master of vocals, banjo, and guitar and well known for influencing the development of folk music and for his continued commitment to social justice, peace and environmental issues, is the recipient of the first Phoebe Jacobs Award of Distinction which will be presented by Beth Israel Medical Center’s Louis Armstrong Center for Music & Medicine at its 8th Annual What A Wonderful World event on Monday, September 23rd.

Also being honored are Fran Silverman, ACSW, LCSW-R, Director of Beth Israel’s Department of Social Work and Home Care Services, and Music for AIR patient Joe Regan, Jr. — recipients of the 2013 What A Wonderful World Award.

The honorees will be feted at a special cocktail reception and silent auction to be held at Beth Israel’s Phillips Ambulatory Care Center’s Nerken Family Atrium, 10 Union Square East in Manhattan. Proceeds from the event benefit the Louis Armstrong Center’s clinical services.

With dancer/choreographer Mercedes Ellington presiding, the program will open with performances by the impressive ensemble of actor/musicians of Broadway’s ONCE, winner of eight 2012 Tony awards including Best Musical. Jon Faddis, internationally renown jazz artist and recipient of the What A Wonderful World Award in 2009, will highlight with his unparalleled virtuosity at the trumpet.

“Our honorees are emulating the legacy of Louis Armstrong, a great musician and humanitarian. Each one of them is making a difference in the lives of many people and we are pleased to recognize and celebrate their achievements,” said Joanne Loewy, DA, MT-BC, LCAT, Director, The Louis Armstrong Center for Music & Medicine (LACMM).

“The Phoebe Jacobs Award to Pete Seeger, who worked alongside his late wife Toshi-Aline Ota on his many endeavors, reflects our highest regard for his contributions to socially conscious music with a message and humanity as a peace and environmental activist,” added Stephan Quentzel, MD, Medical Director of the Louis Armstrong Center.

Phoebe Jacobs was Executive Vice President of the Louis Armstrong Educational Foundation. Years earlier, she was a press agent, manager and record executive who guided the careers of jazz greats, including Louis Armstrong, Duke and Mercer Ellington, Ella Fitzgerald, Peggy Lee, Sarah Vaughan, among many. Until her demise in 2012, she worked tirelessly for many years in support of the Louis and Lucille Armstrong Music Therapy program at Beth Israel, established two decades ago.

The Louis and Lucille Armstrong Music Therapy Program at Beth Israel is a legacy of the beloved jazz trumpeter that became the foundation for The Louis Armstrong Center for Music and Medicine, located in the Phillips Ambulatory Care Center, 10 Union Square East in Manhattan. It is made possible by a generous gift from the David B. Kriser Foundation and through the estate of John H. Slade, directed to Beth Israel by the late hospital trustee Richard Netter, and with additional support provided by the Louis Armstrong Educational Foundation.