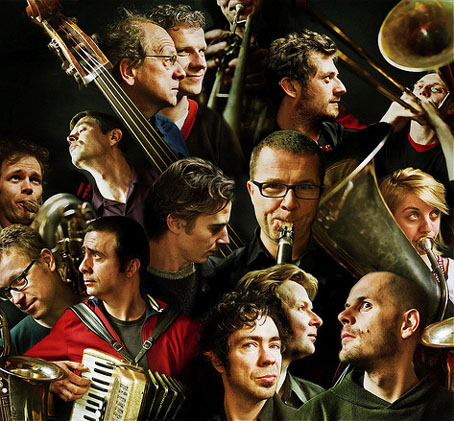 slideshow
Flat Earth Society is coming to the USA for their first performances ever on American soil.

The music of FES, varying from strictly written sheet music to liberating improvisation, is 95% home- made. Streaks of music of other composers are used as inspiration, frequently arranged, adapted and integrated into FES compositions, adding a wide range of atmospheres and styles to the eclectic FES universe. FES, who dares to flirt with other disciplines as theatre and film and owns the ability to seduce a number of different audiences, from more select jazz listeners to a wild young rock public, is at its best live on stage. Toots Thielemans experienced their joy of playing, their humour and technical skill and joined them on stage during Jazz Middelheim 2003. He refers to FES as a 'a band of rebels!' FES must be the most versatile and at the same time the most daring big band phenomena ever.

“The music is full of bizarre and shocking juxtapositions...but once you've got over the sheer oddity, the juxtaposition becomes poetic, though in a surreal way. It's as if a night scene in a Raymond Chandler novel were suddenly invaded by a flock of seagulls. Vermeersch's approach is risky, which is what makes it so energising." —Ivan Hewett, The Telegraph

“Flat Earth Society, a tight 14-piece band led by clarinettist and composer Peter Vermeersch, late of X-Legged Sally. Two brilliant sets confirmed how accomplished they are, twisting rapidly from theatrical bombast to tenderness, collective improv, mad movie-chase music and back to swinging anthems... Wet is Wet presented jazz as envisaged by Goebbels. Vermeersch grins impishly, like a young Daniel Libeskind, as he directs his close-knit ensemble. He is a monster talent, with an outrageously original band." —John L. Walters, The Guardian, about the concert at the London Jazz Festival, November 2007