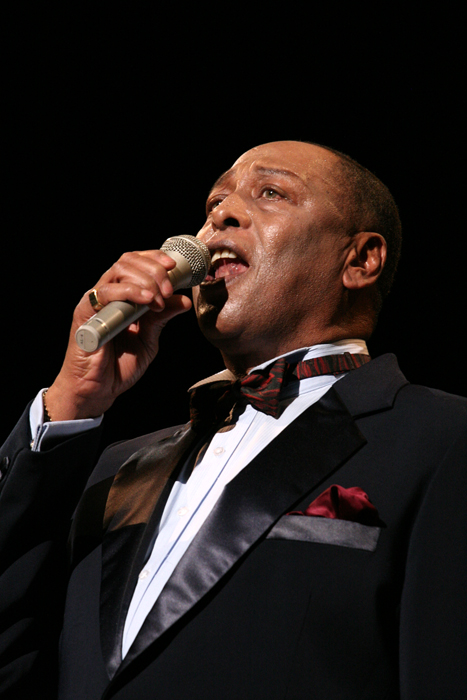 “I had made the decision in '98 to return to the United States," said Fisher. “You get tired traveling, living in hotel to hotel every month. I believed it was time to make the move."

But because of personal reasons, the move didn't take place until 2000.

He chose to make Las Vegas his home.

“I had friends who said, 'Don't go to Vegas. They will eat you alive in Vegas,' “ Fisher said. “But I'm a swimmer, and I belong in deep water."

The entertainment waters are very deep in Las Vegas. The city is full of aspiring performers looking for the opportunity to shine.

Fisher was born in Clarksdale, Miss., hometown of late blues legend {Muddy Waters}, but his family moved to Chicago when he was 10.

He had no intentions of growing up to be a singer. The only singing he did was harmonizing on street corners.

“When I came out of the Air Force I was going to be a lawyer," Fisher said. “But then I was smitten by a girl, a ballerina who was going to perform in a show at a Chicago junior college.

“I figured if I could get in the show, I would get a chance to tell her about my feelings."

{James Mack}, who produced recordings for such artists as {Nancy Wilson} and {Ramsey Lewis}, was the musical director at the college.

Fisher said Mack made him aware of his innate vocal talents.

“He took me under his wing and trained me," Fisher said.

Fisher, whose voice naturally sounds like Cole's, ended up opening and closing the show, “Jubilee," at the college.

“I never got a chance to tell her what I felt," Fisher said. “Eventually, she married some Beverly Hills doctor."

He spent several years developing his craft, performing wherever and whenever he had a chance.

“I made all the jam sessions, the open mikes," Fisher said. “I would be the first there.

“That led to me opening for (Oscar Brown Jr.), and it gave my first shot onstage, 'Summer in the City.' “

During the '60s he recorded albums on his own label, with Mack arranging and conducting.

In 1966 Fisher opened for {Stevie Wonder} at the Regal Theatre in Chicago. Then he moved to Los Angeles and did some acting work in films.

When he wasn't pursuing his acting career, he was the resident entertainer at the famed “Sportsman Lodge," a hangout for celebrities.

“Then I was offered a three-month contract to perform in Japan," Fisher said.

“Then I came back to the United States for a while, but I wound up in Vancouver, Canada, for five years," Fisher said.

From Canada, he went to Europe.

A three-month contract in Sweden turned into 16 years, during which time Fisher worked for major hotels in Sweden, Norway, Holland, Denmark, Switzerland and Greece.

“I even worked in Poland," Fisher said.

Now he works at the Baccarat from 8:30 p.m. to 1:15 a.m. Wednesday through Sundays. About 60 percent of his songs are ones for which Cole is noted.

When he isn't performing he's working on a CD, scheduled to be released in August. It's the first time he's recorded in 10 years.

“The industry hasn't had a clear direction in recent years," Fisher said. “Until now, I didn't have the opportunity to record the way I wanted to."

Fisher also has a production show he is promoting&#151Dem Boys From Chicago: A Tribute to Nat 'King' Cole, Lou Rawls, Joe Williams and Oscar Brown, Jr.

Until the show gets off the ground, he is content performing at a venue visited by people from all over the world.

“I'm very happy to be here, playing in the best piano lounge in the city," Fisher said. “Every entertainer's dream is to play Las Vegas. They can say they don't care about it, but the goal of every entertainer is play Vegas."