First-ever Baltimore Jazz Fest is free and family-friendly. All performers are Baltimore based, and performances cover a range of jazz genres. 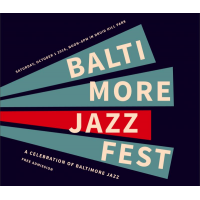 Beautifully situated on a Chesapeake Bay tributary with tidal waters of the Patapsco River forming the Inner Harbor, Baltimore is a visually arresting city. Equally exiting is the city’s rich and enduring jazz scene, to which The Baltimore Jazz Alliance (BJA) aims to bring public attention.

BJA proudly announces the city’s first-ever jazz festival to be held Saturday, October 1st, 2016. Baltimore Jazz Fest will celebrate the past, present, and future of America’s greatest musical art form. Presented by the Baltimore Jazz Alliance and Baltimore City Recreation & Parks, the event will be held from noon until 8:30 p.m. in picturesque Druid Hill Park, adjacent to the H.P. Rawlings Conservatory, at Gwynns Falls Parkway and Beechwood Drive.

Baltimore Jazz Fest will showcase a plethora of outstanding artists based in the area, offering a variety of styles from Latin and gypsy jazz to contemporary and straight ahead jazz. Performers include the widely-touring gypsy-jazz group, Hot Club of Baltimore, the funk/jazz stylings of the Greg Hatza ORGANization; Latin salsa from Rumba Club, straight-ahead jazz by the Clarence Ward III ensemble, and contemporary smooth jazz by Art Sherrod Jr.

Venerated musician and educator Charles Funn will direct young musicians in the Dunbar Jazz Ensemble and lead the festival’s closing performance of “Baltimore Legends,” featuring a group of jazz musicians with decades of playing in the city and beyond. Funn is the 2015 recipient of a Jazz Hero Award from the Jazz Journalists Association for his work as a community leader.

The festival will be MC’d by Rufus Roundtree and Marcellus Shepard. Rufus Roundtree is a trombonist and band leader of Rufus Roundtree and Da B'more Brass Factory. He grew up and went to school in Baltimore and has formerly taught in Baltimore City Public Schools. Marcellus “Bassman" Shepard is program director at WEAA and host of “In the Groove" and co- host of the nationally syndicated “Cool Jazz Countdown." He was recently named “Jazz Presenter of the Year” by Jazz.com.

The beautiful grounds of Druid Hill Park and the Rawlings Conservatory offer a perfect setting for both seasoned jazz fans and listeners new to jazz. The event also features educational offerings such as a musical “petting zoo,” where children can try their hand at playing various instruments. Food and drink vendors as well as arts-and-crafts vendors will contribute to a family-friendly, picnic-like atmosphere.

Baltimore can lay claim to such iconic jazz figures as Billie Holiday, Ethel Ennis, Cab Calloway, Chick Webb, and Eubie Blake who performed in the early 1920s when the Royal Theater was one of the “circuit theaters” regularly visited by black entertainers. Stars such as Duke Ellington, Pearl Bailey, and Louis Armstrong also appeared there.

The city enjoyed a heyday of jazz with many venues concentrated along Pennsylvania Avenue until the 60s when changing economic conditions led to a decline in the neighborhood. Smaller clubs continued to spring up, no longer concentrated in one area. Names that make any longtime Baltimore jazz-lover nostalgic include the Sportsmen’s Lounge, The Closet, the Sphinx Club and the New Haven Lounge.

Formed in 1964, The Left Bank Jazz Society was instrumental in keeping jazz front and center in Baltimore. They booked just about every important jazz performer on the national scene until the organization disbanded three decades later.

Today, jazz is thriving in Baltimore. The jazz program at Towson University was begun decades ago by beloved composer and bandleader Hank Levy whose composition “Whiplash” inspired the award-winning film of the same name. (Levy was writing such confounding but thrilling tunes with odd time signatures even before Dave Brubeck’s band popularized the notion.) The Jazz Studies program at The Peabody Conservatory of the Johns Hopkins University attracts students from all over the world. Large auditoriums in colleges and museums and mid-size venues like the Caton Castle, An die Musik Live, and Eubie Blake Cultural Center offer plenty of jazz, as do numerous restaurants and bars. Local performers stay busy performing in Baltimore and nearby Washington, D.C., and Charm City is a stop for touring bands.

In 2004, another organization took on the mantle of fostering jazz. Since its founding (and its non-profit incorporation in 2008), the Baltimore Jazz Alliance has served artists and audiences by elevating the role of jazz in the region. Its primary mission is to put the spotlight on talented homegrown artists. Members produce a newsletter, an online calendar of events, and a “Where’s the Jazz” map leading jazz lovers to the music.