Firehouse 12 to Present the Rudresh Mahanthappa Quartet May 18th 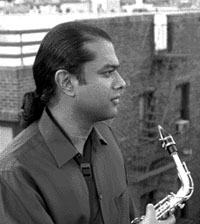 “If this seems complex and abstract and intellectually challenging, it is," wrote Alexander Gelfand of Codebook in a September 2006 Jazziz article. “But the music doesn't sound that way to the ear. It sounds groovy, and intense, and dissonant, and jarring, and it makes you feel like dancing, and also listening very carefully." AllAboutJazz.com's John Kelman added, “What takes Codebook out of the realm of clever convention and makes it a powerful statement is the freedom with which every player approaches the material...Mahanthappa isn't afraid to build complex lines that serve as catalysts for the rest of the group, directly or indirectly cuing directional shifts."

Time Out New York recently declared, “Many young artists have used jazz to take on issues of cultural identity, but few have done it as thoroughly as Indian-American altoist Rudresh Mahanthappa." A regular on both DownBeat's International Critics Poll and annual best-of-the year lists, Mahanthappa has been impressing critics since moving to New York a decade ago. Much like his frequent collaborator, and fellow Indian- American, Vijay Iyer, he has created his own distinctive sound by incorporating the culture of his Indian ancestry, and a myriad of other influences, into the jazz idiom. In addition to his quartet, which also recorded 2002's Black Water (Red Giant Records) and 2004's Mother Tongue (Pi Recordings), he also leads/co-leads a number of other ensembles including a duo with Iyer called Raw Materials and the groups Indo-Pak Coalition, MSG, and the Dakshina Ensemble.

Firehouse 12 is an award-winning bar, state of the art recording studio and unusually intimate music venue located in New Haven's historic Ninth Square District. Its distinctive 75-seat performance space, located inside the recording studio, offers world-class acoustics and unprecedented technical possibilities to both listeners and performers. Many of the most respected names in jazz and creative improvised music have performed at Firehouse 12 since it opened its doors in April 2005.

The local media has called it “one of the region's prime centers for new and improvised music" (Owen McNally, Hartford Courant), noting both its “astutely stylish, updated-classic aesthetic" (Hugh Elton, New Haven Advocate) and its dedicated fan base of “people who bring near-religious reverence to the music, producing an exchange of energy that often fires great performances" (Regina DeAngelo, New Haven Independent). Play's David Lewis recently added, “they present such an amazing assortment of artists that you really can't go wrong."

The Arts Council of Greater New Haven recognized owner/producer/recording engineer Nick Lloyd with a 2006 Arts Award for his “visionary restoration" of this landmark firehouse building, which also earned the architects, Gray Organschi Architecture, a 2006 Design Award in the preservation category from Connecticut's chapter of the American Institute of Architects (AIA).

In 2007, Firehouse 12 founded its own label, Firehouse 12 Records, with the intention of releasing a mix of physical and digital-only recordings, including music recorded live during recent performances. Its first new releases, the Anthony Braxton 12+1tet's 9 Compositions (Iridium) 2006 and the Taylor Ho Bynum Sextet's The Middle Picture, were released April 3rd.