FBI Spent Years 'Researching' The Lyrics To 'Louie, Louie' Prior To Realizing The Copyright Office Must Have Them

SOURCE: HYPEBOT
May 12, 2015
Sign in to view read count
Last week, as you may or may not have heard, a guy named Jack Ely passed away at the age of 71. The name may not be that familiar, but the voice almost certainly is. Jack Ely was&#151fairly briefly—the lead singer of the Kingsmen, and happened to do a cover song in a single take under poor conditions, that created one of the most memorable songs in rock and roll history, also known as Louie Louie:

From Mike Masnick on Tech Dirt

You know the song. You also know the lyrics are completely indecipherable. However, with Ely's death, there's been renewed attention to the fact that the FBI spent nearly two years investigating the damn song. It is just as ridiculous as it sounds, but the FBI has released the fileon its investigation and it's a rather hilarious read. It turns out it wasn't just the FBI, but involved the FCC and the Post Office:

Apparently, the government was being inundated with claims from people (some of which you can see in the file) insisting that they had heard the indecipherable lyrics were actually “obscene." If you want to see the supposedly “obscene" interpretation of the lyrics, there's one set on page 14[pdf] of the document, though I warn you, even the falsely heard “obscene" lyrics are not particularly obscene by today's standards (and I'm at a loss as to how they're that obscene by the standards of 1963, frankly). On page 22, there's another, mostly different set of falsely heard “obscene" lyrics that at least includes the word “fuck." On page 35, yet another version with both “fuck" and “bitch."

There are lots of documents about the FBI playing the record, repeatedly, at different speeds, and all coming to the conclusion that you and I and everyone else already knows: the lyrics are basically indecipherable.

There are a few more times this determination was made, in part because after the FBI had already gone through the whole investigation, J. Edgar Hoover reopened it after a concerned parent wrote him a letter — complaining that whether or not the real lyrics are obscene, it doesn't matter because teens can hear the obscene lyrics and “every teenager in the country 'heard' the obscene not the copywritten lyric." There are also letters to Attorney General Robert Kennedy that include lines like “these morons have gone too far," and “This land of ours is headed for an extreme state of moral degradation what with this record, the biggest hit movies and the sex and violence exploited on T.V. How can we stamp out this menace? ? ? ?" Really.

But, in the end, as everyone knows, the song is simply indecipherable, rather than obscene.

And that's because the band was in a tiny studio with just three mics, played a single take of the song and Ely had to scream at a microphone on the ceiling trying to have his voice heard above the instruments (a task he basically failed at doing). But, the idea that there was a mystery to the lyrics is kind of ridiculous for a few reasons, the first one being that the song is a cover song, and the FBI could have easily listened to a few of the earlier versions of the song, such as the original by Richard Berry, or another popular one by Rockin Robin Roberts and The Fabulous Wailers (the one that inspired the Kingsmen to do the cover). You can hear both those and another one right here. Their lyrics are a lot more intelligible in all of those versions, and you can pretty quickly tell that the lyrics to the Kingsmen version is supposed to be the Rockin Robin Roberts version.

Also, as Marc Randazza notes, it took nearly two years for someone in the FBI to think, hey, isn't the song registered at the Copyright Office down the street? Maybe we should send someone over there to find out what it says? This was after the FBI had reached out to the record label (who gave them the accurate lyrics) along with the original author of the song, Richard Berry, who told them the lyrics. Oddly, apparently, the FBI never bothered to ask Ely himself what he sang, though I'm sure he would have said the same damn lyrics, which are below: 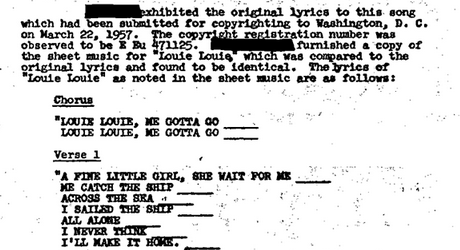 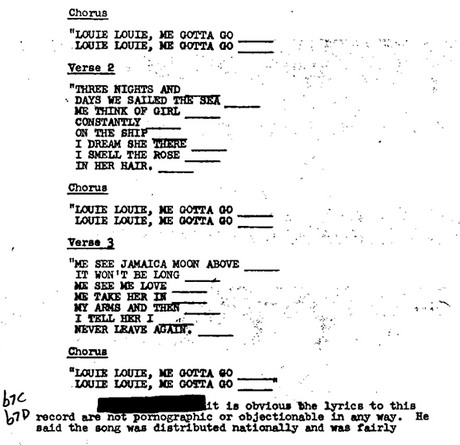 Still, what a bizarre story of moral panics, FBI and governmental overreach, the First Amendment... and a bit of copyright thrown in just for fun.

Oh, and as a general postscript, for all the hand wringing about possible obscenities in the song... there actually is one. Just not in the lyrics. At 54 seconds into the song, the drummer Lynn Easton actually fumbled his drumsticks banging them together and yells out “fuck." The FBI never caught on to that, but you can actually hear it if you listen...