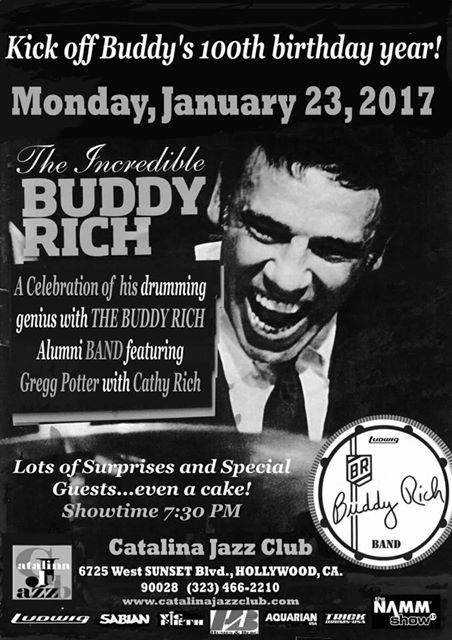 Multi award-winning drummer Kenny Aronoff will be featured with the Buddy Rich Band to celebrate Buddy Rich’s genius and legacy kicking off the late icon's 100th birthday year. On Monday, January 23rd, 7:30pm at the Catalina Jazz Club in Hollywood, Aronoff, EMMY award-winning drummer Gregg Potter and Rich's daughter Cathy, on vocals, will appear with the legendary band for the special evening that will kick off a year of tributes and celebrations of Rich’s life.

Aronoff has long considered Rich one of his musical heroes and is honored to have had multiple opportunities to play with the sixteen piece band including recording with them on the double CD Burning for Buddy in 1994; he called it “the greatest and most intimidating recording session of my entire life.”

BackBeat Books (Hal Leonard) recently released Aronoff’s autobiography, Sex, Drums, Rock ‘n’ Rol!: The Hardest Hitting Man in Show Business, in which he discusses his career and path to success. Forbes recently listed it as one of the Top Business Books of 2016, calling it “fascinating, motivating, and inspiring."

Kenny Aronoff has been named #1 Pop/Rock Drummer and #1 Studio Drummer by Modern Drummer, and one of the “100 Greatest Drummers of All Time” by Rolling Stone, along with Rich. Throughout his career of nearly four decades, he has recorded and performed with the biggest stars in every genre of music, including John Mellencamp, Bruce Springsteen, Melissa Etheridge, Paul McCartney, Ringo Starr, John Legend, Beyonce, Lady Gaga, Garth Brooks, Johnny Cash, Willie Nelson, Santana, Keith Urban, Stevie Wonder, the Rolling Stones, and Bob Dylan, to name a very few. With a style of playing that combines power and finesse, his unique and versatile sound has been instrumental on over 60 GRAMMY nominated and awarded recordings representing over 300 million units in sales, with more than 1,300 that were RIAA certified Gold, Platinum or Diamond.