It was a starting point for us all as both musicians and friends, and it was a great honour to perform with a legend, Mr. Brian Jackson!
—Patrina Morris 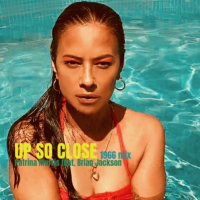 Patrina Morris brings a romantic summer dance feeling this month with the release of an upbeat single “Up So Close” the original 1966 vibe mix featuring Brian Jackson. Brazil meets a touch of Ibiza in this duet. Recorded in home studios, Brooklyn, Portugal, London and Brazil come together for the first time.

Patrina: “We made this in an “old skool” way, before I had even met Brian in person and never released the original version, only an Ibiza remix. This is the original song which was a work in progress across the seas adding Jon Klein and Octavio Pimento da Sousa to the equation. I love the rawness and simplicity of the track. It was a starting point for us all as both musicians and friends, and it was a great honour to perform with a legend… Mr. Brian Jackson!"

Music available in every digital shop including Amazon, Apple Music, Spotify and Tidal.

Patrina Morris was born in India to Anglo-Indian parents and moved to England when she was just six months old. She was brought up in North London and lived there until as a teenager she was spotted by a model agent while working in a restaurant to pay for Art School. Soon she was living in Paris, Milan, Tokyo and New York and making her way in the world of fashion working for some of the most prestigious clients and appearing in Italian and German editions of Vogue, Elle and Marie Claire. Music was always her first love and after a few years she decided to make a change and began working in the music industry as a singer, songwriter and co-writer. Her projects were varied. She worked with Matt Bianco and Aswad and early on she was fortunate enough to work with well known talents such as:

It wasn’t until later when she moved to Portugal and learned to play guitar that she found her voice and created the sound she is becoming known for today.