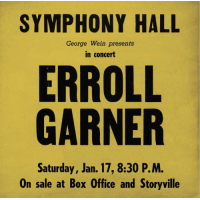 slideshow
In 1959, Erroll Garner was in the middle of a personal storm. The previous year, his label, Columbia, released earlier Garner recordings without his approval. Martha Glaser, his manager, hit the roof and said the label had breached Garner’s contract by releasing inferior recordings without his permission. She had Garner stop recording for Columbia. Disputes over the contract and a demand for higher fees for Garner led to a lawsuit in 1960 by Glaser and a countersuit by Columbia. The dispute wouldn't be resolved until 1962, with Glaser winding up controlling Columbia’s release of Garner’s recordings. Garner also started his own label with Glaser—Octave Records—for all future recordings.

I've always thought Garner's move was rash and ultimately a mistake. We'll never know, of course, if Columbia's recordings of Garner in the 1960s and '70s would have been as exquisite as his 1950s output. It's doubtful, given the upheaval in jazz recording during those years. What I do know is that much of Garner's material on Octave wound up being inferior and many albums were ill-conceived. Glaser would have done better by Garner and Garner lovers had she found a way to handle the Columbia contract violation with Garner's future in mind. Truth be told, Garner was a far better live player than a studio artist, as his concert albums show. To make ends meet, he had to amp up his touring schedule after departing from Columbia.

But what his manager's legal actions did for Garner was give him the freedom to record what he wanted and how he wanted to do it. Which may have been more important for Garner than anything else. But sometimes creative freedom results in albums that don't sell very well. Not all artists are the best judges of what the public will buy, and not all producers are the best judges of what's art and what's junk. The best albums by any artist have been somewhere in the middle, where a producer has a say and the artist has a say and they listen to each other and appreciate each other's judgment.

Garner's live recordings are almost always sterling, no matter when they were recorded. His love for the audience and the mischief he created on his complex and mysterious introductions as everyone in the audience as well as his bassist and drummer tried to figure out what song he was about to play. Add the recently discovered concert at Boston's Symphony Hall on January 29, 1959 to the list of great Garner performances. Earlier this year, the 27 tracks recorded that night turned up on the Garner box set, Liberation in Swing: The Octave Records Story & Complete Symphony Hall Concert (Mack Ave.).

Now 9 of the 22 previously unreleased concert tracks have been pulled out from the box and offered as a stand-alone vinyl or CD release. For the full concert tracks, you'll still have to buy the box. Backed by bassist Eddie Calhoun and drummer Kelly Martin, Garner swings through Dancing in the Dark, My Funny Valentine, But Not for Me, The Nearness of You, Foggy Day, Gypsy in My Soul, I Didn't Know What Time It Was, Lover, Last Word, The Song From Moulin Rouge, I Can't Get started, Back Bay Stride, Gospel Mambo, Shell Game, My Fair Lady Medley, Frenesi, Dreamy, I Get a Kick Out of You, Misty, Indiana and Moment's Delight. All have the freewheeling sound of Garner's signature piano style and swing, only more free, since he recently had been liberated from Columbia and seemed to be as happy as a lark. There's a lot to be said for happiness.