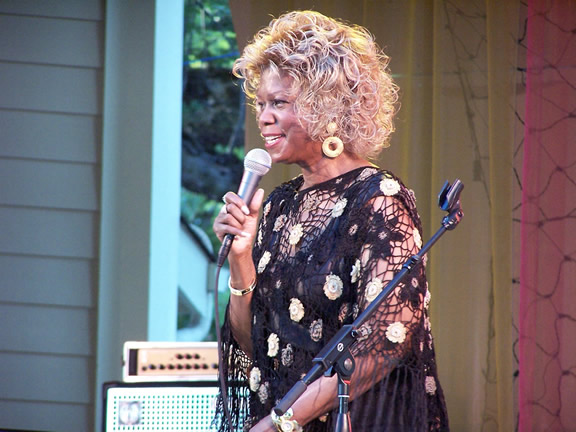 slideshow
Ernestine Anderson died on Thursday at the age of 87 at a retirement home in Seattle. The singer’s career of more than six decades began in that city when she was a teenager. She went on to be featured with the big bands of Johnny Otis and Lionel Hampton, record the classic album Hot Cargo and receive Grammy nominations and rave reviews for recordings she made after a comeback in the 1970s. For an extensive account of Ms. Anderson’s life, see Paul deBarros’s article in The Seattle Times. His piece contains video of a 1978 performance in Germany.

Eight years ago, as she was approaching her 80th birthday, I wrote of an Anderson concert—“Looking frail, she made her way slowly and uncertainly on stage, sat on a chair, took a while to get ready, and gave one of the great concerts of her life.” To read the entire account, go here.

Jim Wilke is replacing his scheduled Jazz Northwest broadcast on Sunday with a tribute to Ms. Anderson. The program airs at 2 PM PDT and streams at kplu.org. Jazz Northwest is recorded and produced by Jim Wilke exclusively for 88.5 KPLU and kplu.org. After broadcast, it may be streamed at jazznw.org.

“Steen,” as she was known to many of her friends, objected to the title Hot Cargo that the producers gave