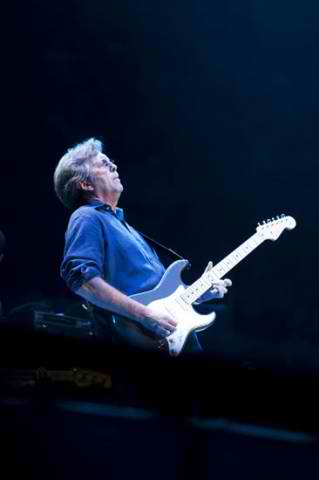 slideshow
The hottest concert of the summer is shipping November 9th.

Over the summer, Eric Clapton gathered a veritable Who's Who of the world's most talented guitar players at the third Crossroads Guitar Festival, an 11-hour celebration of the six-string that attracted a sold-out crowd of more than 27,000 music fans to Chicago's Toyota Park. All profits from this daylong display of guitar virtuosity benefited The Crossroads Centre in Antigua, a treatment and education facility Clapton founded to help people suffering from chemical dependency.

“The Crossroads Festival is the realization of a dream for me, to gather a group of amazingly talented musicians to perform on one stage," Clapton said. “The Crossroads performers are all musicians I admire and respect."

It's no surprise a festival named for a Robert Johnson song would include a heavy dose of the blues and CROSSROADS GUITAR FESTIVAL 2010 does not disappoint with remarkable performances by Robert Cray, Hubert Sumlin (Howlin' Wolf's guitarist), Jimmie Vaughan, Sonny Landreth, Gary Clark Jr., Keb' Mo,' and Buddy Guy, plus B.B. King who led an all-star jam of his classic “The Thrill Is Gone."

Other styles find a home here too, with “Blackwaterside" by Scottish singer-songwriter Bert Jansch an accomplished acoustic player; “One More Last Chance" and an amazing take on Clapton's “Lay Down Sally" by country picker Vince Gill who is accompanied by the legendary James Burton and others; “Angelina" and “Vonetta" by jazz guitarist Earl Klugh; and Jeff Beck who transforms Puccini's aria “Nessun Dorma" into a soaring piece for electric guitar.

CROSSROADS GUITAR FESTIVAL 2010 also features Bill Murray, who once again supplied the festival's nonmusical highlights with his over-the-top introductions of the performers. Throwing himself into the occasion, Murray dressed up as Jimi Hendrix at one point, and even made an appearance in a jumpsuit in the guise of Elvis Presley.

The first Crossroads Guitar Festival, in June 2004 at the Cotton Bowl in Dallas, was an unprecedented collection of guitar icons from blues, rock, and contemporary music. The sold-out show was chronicled in a two-disc DVD that has since gone on to become one of the world's top-selling music DVDs, achieving the 10x platinum mark in the United States alone. The Crossroads Guitar Festival 2007 was the second such concert by Clapton and was also staged at Toyota Park in July of 2007 and was filmed for a second DVD that met similar acclaim and has been certified 6x platinum.

Be one of the first 500 to pre-order from Rhino.com and you'll get an exclusive Crossroads 2010 audio CD sampler!