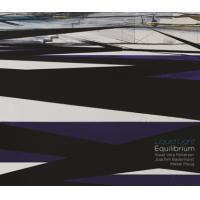 “...music of exploration...There are elements of serenity from many different avenues of influence on each of the members... Equilibrium has made it sound so easy and so beautiful...Highly Recommended and a must have for everyone." —JazzWrap

Liquid Light the third release by the European trio Equilibrium (Norwegian vocalist Sissel Vera Pettersen, Danish guitarist Mikkel Ploug , and Belgian reed player Joachim Badenhorst) demonstrates again the beautifully strange, ecstatic, uncanny and sometimes grotesque spaces these three can find themselves in. It's a cliché to say that the term “jazz" has become a convenient broad umbrella for very different kinds of music, but even so one would be tempted to label Equilibrium's music something else - but what? They do use instruments common in jazz, free improvisation is central to their practice, and they all lead and/or play in other bands that are definitely some kind of jazz. (Joachim is a member of the Han Bennink Trio and Tony Malaby's Novola, and was named a rising star on clarinet in the 2013 DownBeat Critics Poll; Mikkel tours his own groups featuring Mark Turner or Loren Stillman; and Sissel has worked with iconic figures in the jazz world such as Jon Balke and Marc Ducret.)

You could think of their music as “post-jazz" - and post-folk, post-world, post-classical, post minimalism and maybe post- psychedelic while we're at it...But not post-modern, as that would imply a conscious pastiche of disparate styles, whereas Equilibrium's process is quite organic. The process indeed is what they value most about their collaboration, which has been happening on and off since 2007. They all lead busy lives outside the group, and bring their very different musical and life experience to the table. But, as Mikkel says, “essentially I believe we still look for the same goal - to melt our sounds into something that moves us." This involves “leaving half of our usual selves on the doorstep and keeping the other half open to go with the others. So it becomes an open dialog of the three different worlds we represent musically. Often none of us knows what will come next - it's a very undefined sound for us, still, after all these years of playing together."

For the improvs at least it's all about communion, in an almost spiritual sense. Sissel comments,"What makes this trio so dear to me is the fact that making music together feels very fluent and in the moment. It´s like a good conversation, you just dive into it without a fixed idea of where it will lead, and along the way it twists and turns in its own organic shapes and with its own dynamics. You might touch on themes that surprise you, and that you didn´t even think of before, without really knowing how you ended up there. To me that's the best place in music, when it all melts together into one flowing energy, and you become one with each other, the music and the now." As I said, it's jazz! But also, check out Sissel's solo vocal meditation “Respire", created using a very long reverb but without any looping, which has a comparably strong sense of presence in the creative moment.

Similarly for Joachim: “In the moments when we improvise I strive for a sense of 'unknowing', to enter the conversation with a blank state of mind and just go along with the energy flow, like making a painting together on a blank canvas. That is of course an ideal, to reach such a selfless awareness. Sometimes when Mikkel and Sissel set up their loops in a certain 'tribal' atmosphere, then it does provoke some images in my head, and I feel as if I'm playing in a particular setting, as if I am part of a group ritual in a remote village, as if my clarinet was a ney or a shakuhachi. That's not something we discuss beforehand, nor do we talk about it afterwards."

The compositions, written by all three members, balance the improvisational ebb and flow, contributing often-driving rhythmic structures, and melodies that can aspire to a kind of sublimity and, yes, serenity, another notable quality of their music from the beginning. It's a music that's sophisticated in its means, and somehow both elusive and transparent in its effect, with roots and feelings that seem to go back centuries, but a holistic approach that's of today.

About the mix by Rainbow Studio's Jan Erik Kongshaug, Mikkel says: “We talked about going more in the direction of the spacious sound of the first album [Equilibrium, which Jan Erik also mixed]...He is indeed a master, he immediately gets what we are hoping to achieve and executes it to perfection."