“No other film composer has shaped music as unmistakable as Ennio Morricone“
- Morag Reavley, BBC


Italian composer and conductor Ennio Morricone, who has composed some 400 motion picture scores over a 45-year career embarks on a European tour this spring.


The highly prolific composer has worked with virtually every major international director of the last half-century. Morricone has earned five Academy Award nominations for original score -- for Days of Heaven (1978), The Mission (1986), The Untouchables (1987), Bugsy (1991) and Malna (2000).


While the bulk of his work has been on Italian films, including The Good, the Bad and the Ugly, Once upon a Time in America and Cinema Paradiso, Morricone has composed memorable scores for such international titles as Bulworth, In the Line of Fire, La Cage aux Folles and Two Mules for Sister Sara. His most recent project, Baara, was released in 2009.


Born in Rome in 1928, Morricone was hired in 1964 by Sergio Leone and began a long collaboration with the director on what came to be known as “spaghetti Westerns," though his career has spanned most film genres from comedy to romance to horror. His more than 400 soundtracks pull from a diverse selection of musical styles--classical, jazz, pop, roock, electronic, avant-garde, and traditional Italian folksongs. A tireless artist, Morricone has appeared in venues around the world conducting his own classic compositions.


A five-time Oscar nominee and the winner of a Grammy and two Golden Globes, Ennio Morricone has won BAFTA's Anthony Asquith Award for Film Music five times, and he is an eight-time winner of the Nastro D'Argento Award and a six-time winner of the David di Donatello Award, the leading film awards in his native Italy. Morricone has also received lifetime achievement awards from the Academy of Motion Picture Arts and Sciences, ASCAP, the Venice Film Festival, the Los Angeles Film Critics Association and the National Board of Review. 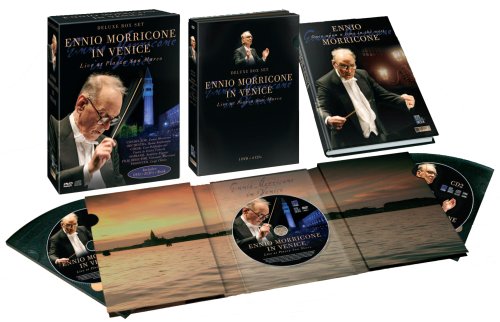 Legendary soundtrack composer and Academy Award winner Ennio Morricone, treats a captivated audience to some of his most beloved compositions in this live Venice concert.