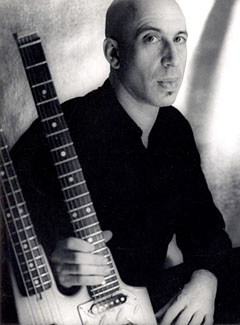 “Elliott Sharp has played such an integral role not only in the avant-garde music scene but also in the entire New York arts community," exclaims Steve Wax, ISSUE Board Chair. “We're humbled to be hosting such a special event in his honor."

“Having this celebration at ISSUE Project Room is both an exciting honor and significant in that my history with this great venue extends back to its 'beginnings,'" explains Sharp, supporter of ISSUE since its start in the East Village in 2003. “I look forward to being one of the first to premiere works in its new home."

This marks the first benefit event to be held at ISSUE's future location at 110 Livingston in Downtown Brooklyn, a beautiful 1925 McKim, Mead, and White theater space to which ISSUE was awarded a 20-year rent-free lease. In 2009, ISSUE was awarded a $1.133 million grant from the Brooklyn Borough President towards the estimated $2.5 million necessary. ISSUE has been working with WORK Architecture Company and ARUP to develop the design concept for the space. March 4 Benefit attendees will enjoy the first public preview of the new designs for the space.

Support for ISSUE has been provided by CHORA, a project of the Metabolic Studio, a direct charitable activity of the Annenberg Foundation led by Artist and Foundation Director Lauren Bon. CHORA aims to support the intangibles that precede creativity.