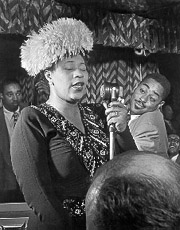 slideshow
I will say from the outset that this post is an exercise in futility. But here goes: Ella Fitzgerald Sings the Irving Berlin Song Book is my favorite entry in Fitzgerald's eight- album songbook series recorded between 1956 and 1964. It's an absurd claim, I know, since each of her tribute albums are like different flavors in the most exquisite box of chocolates. Who's to argue that the caramel with nuts is better than the raspberry cream?

But the Berlin album remains my favorite. And here's why: arranger Paul Weston. If we argue that all of the composers and lyricists Fitzgerald covered were melodic and poetic geniuses, then much of a songbook album's success rested in the hands of the album's arranger.

But Weston's arrangements are truly a cut above, and Fitzgerald is delightfully at ease. For me, Weston always conjures up black-and-white film images of driving through Connecticut in the late '40s or early '50s. You know, in one of those massive Buicks with the holes in the side.

Mind you, I'm not old enough to actually remember doing that, either in the front seat or back. What I mean are those image from Fred MacMurray and Cary Grant movies. In the Connecticut of my imagination, the state still looks like New England, men smoke pipes while raking, and women wear small hats to shop. Weston's charts have that early suburban sound.

Track after track on this Berlin album are brimming with adult sensibility. The marriage between Weston's pen and Fitzgerald's voice was a natural fit, probably because Weston wrote similarly for his wife, Jo Stafford, whose intonation shared many warm, maternal similarities with Fitzgerald's. Recorded in March 1958, the Berlin album was made in the same year as Stafford's finest, Swingin' Down Broadway, which also was arranged by Weston. Fortunately, there are many similarities in the albums' charts.

Weston's swingers and mid-tempo builders place an emphasis on trombones and reeds, and feature darn neat fills and tags. This is particularly true of Let Yourself Go and Puttin' on the Ritz. There's the tender ballad How About Me? with Weston's wandering piano and strings. Or Now It Can Be Told with guitarist Barney Kessel in the background with strings. Or I'm Putting All My Eggs in One Basket, which is a nifty Weston seducer. [Pictured: Irving Berlin]

My favorite track on the album would have to be the little know Berlin cutie Slumming on Park Avenue. Weston pulls out all his texture stops here, complete with a beautifully voiced reed soli.

And catch those Berlin lyric twists:

Le's go smelling, where they're dwelling

Sniffing everything the way they do

It's no wonder Fitzgerald's Berlin album was nominated for anAlbum of the Year Grammy or that she won for Best Vocal Performance, Female. To me, this is the only album in the series in which the singer and the arranger are having an equal dialogue.

Much has of this symbiosis has to do with Fitzgerald's love for Stafford, and Stafford and Weston's love for her. For lack of a better way to put it, this album has the sound of returning home.

JazzWax tracks: Ella Fitzgerald Sings the Irving Berlin Song Book can be found at iTunes or here. Just be sure to download the 2000 remastered version.

And here's Fitzgerald and Jo Stafford singing together about love. I never tire of this clip. It's important to remember that Stafford and Fitzgerald were among the most popular vocalists in black and white markets. Two pros at the top of their game...