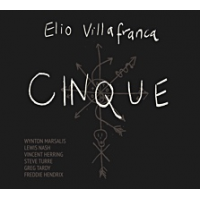 (For vocal or instrumental albums containing at least 51% playing time of newly recorded material. The intent of this category is to recognize recordings that represent the blending of jazz with Latin, Iberian-American, Brazilian, and Argentinian tango music.)

Back To The Sunset
Dafnis Prieto Big Band

Cinque is a five movement suite inspired by the story of Joseph Cinque, who in 1839 led a successful revolt aboard the slave ship La Amistad, days after being sold and transported to a sugar plantation in Cuba. Elio Villafranca's most ambitious project today, showcases the cultural diversity of the five Caribbean islands of Cuba, Puerto Rico, Haiti, The Dominican Republic, and Jamaica; while simultaneously highlighting the Congolese musical heritage woven into the fabric of each of these diverse nations, and yet unified via the forced migration of Africans to the Americas.

Cinque (artistShare) is a body of work that encompasses narration, original composition and selections of Elio's own field recordings of different forms of rooted Congolese rhythms in the Caribbean, especially the traditions of Tambor Yuka, only practiced today in the region of Pinar Del Río, where Elio was born, and Gangá, a rare culture that came from Sierra Leon, Cinque' place of birth, to the region of Matanzas, Cuba. Both traditions are near to extinction today.

“Pianist and composer Elio Villafranca is an inspired and visionary musician. I am profoundly moved by Elio's vision and musicianship. He is a treasured member of the family here at Jazz at Lincoln Center." —Wynton Marsalis

“Elio Villafranca writes and plays with passion and a deep understanding of musical nuance, with chops equal to some of the greatest pianists Cuba has ever produced."—DownBeat Magazine