Elio Villafranca writes and plays with passion and a deep understanding of musical nuance, with chops equal to some of the greatest pianists Cuba has ever produced.
&#151DownBeat Magazine 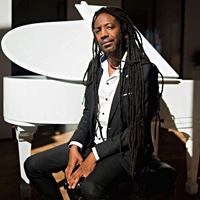 “Don't Change My Name" represents many years of research into the Arara music of Cuba, tracing its roots to the religion and culture of Dahomey, in present day Benin, and telling the story of Florentina Zulueta, an important Arara figure in Cuba and the Cuban slave rebellions. Florentina was born in Dahomey in the 17th century. At just age 15, she was one of many who were captured and transported to Cuba to be sold as a slave. Her original name was “Tolo-Ño," but at the time of her capture in Dahomey, her name was changed to “Na-Tegué." “Na-Tegué" was sold to Julián de Zulueta y Amondo, a notorious slave owner in the Perico region of Matanzas, Cuba. After branding her flesh, he claimed her as his property and forever changed the name of the young “Na-Tegué" to Florentina Zulueta.

Hunt's Point was once a Slave Burial Ground, and we are delighted to bring this music to a place with such sacred history.

The award was inaugurated by Académie Charles Cros in 1948 and offers prizes in various categories. The categories vary from year to year, and multiple awards are often made in any one category in the same year.

Cinque is a five movement suite inspired by the story of Joseph Cinque, who in 1839 led a successful revolt aboard the slave ship La Amistad, days after being sold and transported to a sugar plantation in Cuba.

“Pianist and composer Elio Villafranca is an inspired and visionary musician. I am profoundly moved by Elio's vision and musicianship. He is a treasured member of the family here at Jazz at Lincoln Center." —Wynton Marsalis