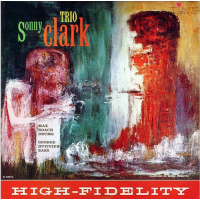 slideshow
Sonny Clark was an elegant jazz pianist who recorded in the hard bop era and was influenced primarily by Bud Powell, though there's a touch of Horace Silver in his punctuation. Clark was a sideman on many important albums, including recordings by Buddy DeFranco, Serge Chaloff, Frank Rosolino, Sonny Criss, Howard Rumsey, Sonny Rollins, Hank Mobley, Le Morgan, Tina Brooks, Jackie McLean, Grant Green, Dexter Gordon and many others. Surprisingly, he recorded only 10 studio leadership albums.

Among his finest album as a leader was Sonny Clark Trio, recorded in New York for the Time label in January 1960. While the entire album is a lyrical feast, Junka qualifies as an electrifying track. On the song, which Clark composed, he moves catlike on the keyboard, springing with agility and landing in just the right places. Dig the feathery, hushed quality of his left hand as his right runs defiantly along the top. Bill Evans admired Clark's taste and hit left hand. Buddy DeFranco loved Clark's ability to deftly unspool ribbons of beautiful improvisation.