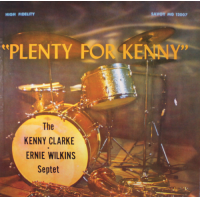 slideshow
In March 1955, producer Ozzie Cadena was given the green light by Herman Lubinsky, the owner of Savoy Records, to record a session with drummer Kenny Clarke and arranger-saxophonist Ernie Wilkins. Cadena had a bit of an agenda. Three of the songs he wanted waxed were his. When he met with Clarke and Wilkins, they went over all of the songs they planned to record. In addition to Cadena's three, Wilkins brought in three gems and the seventh was Now's the Time, a blues taht gave Clarke an opportunity to take an extended solo. Wilkins did the arranging.

Interestingly, all three of Wilkins's compositions and arrangements would easily have been masterpieces for Count Basie. Wilkins had recently left Basie over the band leader's preference for arranger Neal Hefti. One of Wilkins's stunners on the Cadena-produced album, Plenty for Kenny, was Cute Tomato. The soloists on the song, in order, are Eddie Bert on trombone, Cecil Payne on baritone saxophone, Ernie Wilkins on tenor saxophone, Hank Jones on piano and Wendell Marshall on bass.

Here's Cute Tomato, which has a Give Me the Simple Life feel. It's 11 minutes of bliss from Ernie Wilkins. The writing is delicious, Clarke (above) is terrific and the solos are sublime. And we get to hear Wilkins's blowing on tenor, offering up a rich and smokey tone...