EJ Hughes is a talented musician who understands the beauties and intricacies of the music, an artist destined to make a valuable contribution to this art form.
—Sam Rivers 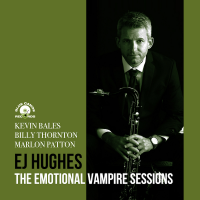 EJ Hughes is back in the light with his riveting Blue Canoe Records release The Emotional Vampire Sessions, a followup to his 2005 release on Blue Canoe Something to Say. The Saxophonist has traveled extensively performing in many genres with a passion and deep-rooted training in jazz, classical, and contemporary music.

Mr. Hughes has taught, performed, and recorded in New York, Georgia, Florida, New Hampshire, and Singapore as well as extensive cruise ship work traveling to over 20 countries. He has spent much of his life as an educator working with students from elementary school to high school to college and beyond. Mr. Hughes is a current instructor at Music and Arts and has helped Georgia State University’s RYJO high school jazz program. In the past, EJ was the instructor of jazz saxophone for Emory University and also taught Advanced Improvisation and Jazz applied saxophone for Georgia State University before returning to his hometown in New Hampshire to be the band director and general music instructor. Hughes has performed with the likes of Grammy award winner Joe Lovano, Grammy-nominated Sam Rivers and two time Grammy winning hip-hop collective Speech & Arrested Development. Says Sam Rivers, “EJ Hughes is a talented musician who understands the beauties and intricacies of the music, an artist destined to make a valuable contribution to this art form".

The Emotional Vampire Sessions (recorded and mixed by John Marshden) leads off with ghosts rather than Vampires with “Ghosts in the Machine". Kevin Bales (Wynton Marsalis, Sam Rivers, and Nat Adderley, Rene Marie) breaks the silence emphatically with the thematic piano groove and makes way for Mr. Hughes’s soaring saxophone and energetic melody. Hughes bounces around the theme with improvisational licks that are familiar yet unique. As drummer Marlon Patton (John Patitucci, Randy Brecker, Rufus Reid, Wycliffe Gordon) pulls and pushes playfully with the rhythm, Mr. Bales takes the helm mid-way through and shows improvisationally mature lead playing that slides away to a Billy Thornton (Dominick Farinacci, Christian Tamburr, Doug Carn) bass solo that continues to intertwine with Mr. Bales injections as the song builds and fades.

The album's title track opens with a sweet, touching piano intro that points the listener to an emotional ballad that one imagines an old crooner from the early 1950s will join. Just as the audience is ready for this sultry voice, Mr. Patton enters with a strong snare lead that explodes into rock-like keyboard interplay. Eventually, Mr. Hughes comes in and exploits the solid foundation that has been laid and the improvisational exploration is awe-inspiring. The vampires are emotional, indeed!

The Emotional Vampire Sessions by Atlanta saxophone-master EJ Hughes is a stunning sophomore release that brings something unique with each listen. The veteran players bring fresh and extraordinary perspective to these modern, straight-ahead jazz expressions. This release is not to be missed.