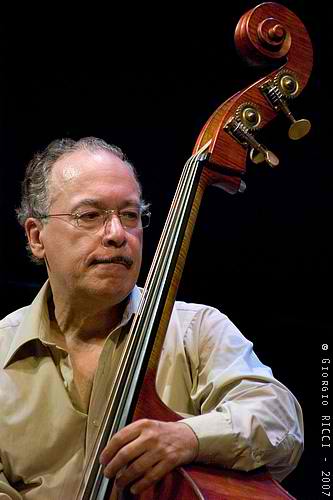 slideshow
Always an impressive technician, Gomez has an identifiably soulful sound—sometimes from the very first plucking of his bass. That has carried him through an impressive array of settings, from traditional trios and fusion-infused amalgams all the way over into the delicate lyricisms of chamber jazz.

The forthcoming Per Sempre fits squarely into the latter category, as Gomez settles into a program marked by sweet grace notes, diaphanous beauty but perhaps not enough variety. Recording in Bologna, Italy, Gomez is joined by saxophonist Marco Pignataro, flautist Matt Marvuglio, pianist Teo Ciavarella and drummer Massimo Manzi. Per Sempre is set for release on May 1, 2012 by BFM Jazz.

Of course, Gomez is perhaps best known as a veteran of the last great Bill Evans Trio, a period he revisited recently with the terrific Further Explorations alongside Chick Corea and the late Paul Motian. And there are times when Gomez’s lithe figures and melodic sensitivity here recall those underrated early 1970s Evans recordings for Milestone and Fantasy. More generally, though, Ciavarella and Co. don’t aspire to the same sense of rapturous anticipation, so much as a directly stated romanticism. That’s best heard on Ciavarella’s love-stricken “Arianna,” which finds Gomez employing a folky attitude while Marvuglio’s flute adds this stirring sense of endless optimism.

The result is an album of full-bodied, if gently conveyed, emotions&#151and that in itself can eventually imbue the proceedings with a sameness. You got the sense that Evans’ best thoughts, for instance, were often the ones in between the words. The ideas behind Per Sempre are far more straightforward, like the difference between a wink and a kiss. That makes its successes — and “Arianna” is most certainly one of them — quite memorable, but occasionally lends the rest of the album a translucent lack of contrast.