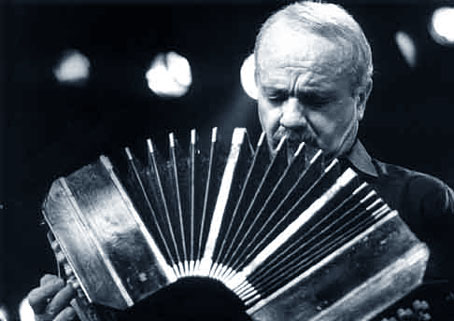 slideshow
DVD TO BE RELEASED ON MARCH 25, 2008 MILAN ENTERTAINMENT BRINGS YOU ASTOR PIAZZOLLA - LIVE AT THE MONTREAL JAZZ FESTIVAL

For the first time, a live performance by the tango genius and his legendary Quinteto is available in its entirety on CD and DVD.

From the time he received his first bandoneon until his death in 1992, Astor Piazzolla's sixty-plus years of musical legacy have driven many critics to extol his achievements not only as being at the pinnacle of Tango performance and composition, but also ranking among the greatest musical compositions of the 20th century. Drawing on his influences, “The Father of Nuevo-Tango" took a genre that was relegated to dance halls and elevated it to concert halls, not only in Argentina, but throughout the world.

Astor Piazzolla - live At The Montreal Jazz Festival serves as a stunning testament to the virtuosity of Piazzolla and his Quinteto. This live DVD captures the essence of a band and bandleader in top form. The audience holds their breath as the band emanates passionate music, played with nuance and precision. The music jumps and soars, staggers and lurches, and the audience responds with thunderous applause after each musical excursion. From the glorious “Resurreccion Del Angel" to the affectionate “Adios Nonino" (a tribute to his late father). This performance, recorded on July 4th 1984 and re-mastered for DVD and CD in 2007, showcases some of the most poignant examples of Astor Piazzolla's genius.

At an early age, Piazzolla's father exposed his son to the music of Jazz greats Cab Calloway and Duke Ellington, along with Tango legend Carlos Gardel. It was later on, in the mid-forties and early fifties, that Astor Piazzolla's compositions began to reflect these influences as well as his training in classical and modern composers, which included Stravinsky, Ravel, Rachmaninoff, Bach, and Gershwin.

Piazzolla's ceaseless muse drove him to collaborate with many musicians in different configurations, some whom he had once looked up to, such as Carlos Gardel, Gerry Mulligan, or Nadia Boulanger, and others who went on to great fame after associating with him, such as Pablo Ziegler, Fernando Suarez Paz, Oscar Lopez Ruiz, and Hector Console. The latter are all members of his famous Quinteto.

The soundtrack to the concert is available on CD from Milan Records on March 4th, 2008.