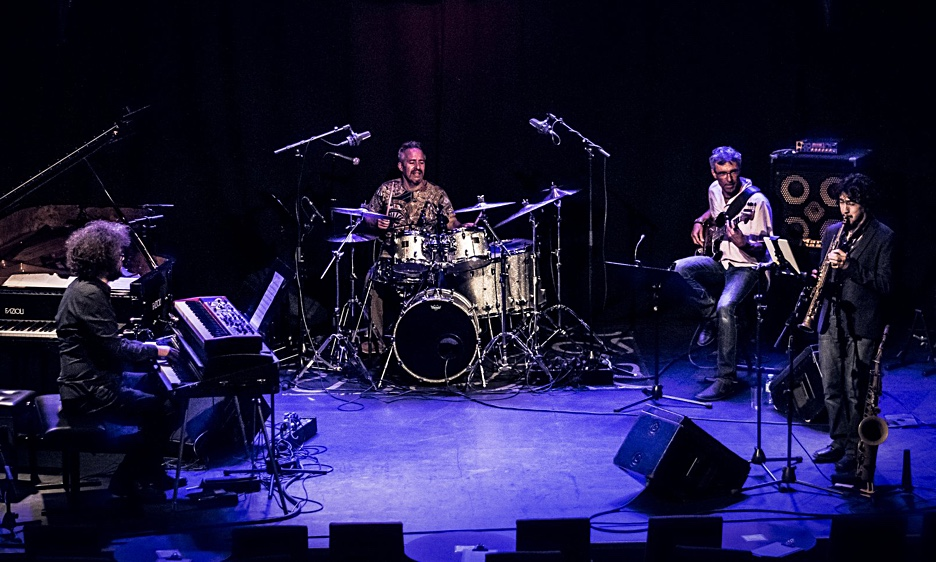 You feel carried away into the world of Afro-Cuban music, West African rhythms, jazz rock of the '70s and '80s with rhythm par excellence. It is your own fault if you do not move with such a rhythmic design!
&#151Ferdinand Dupius-Panther, Jazz Halo 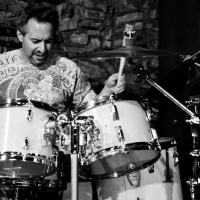 Released during lockdown, Party at One World Plaza continues to garner great reviews and continued radio play on podcasts, internet and traditional radio in Europe, the U.K., Canada and the USA.

A drummer and bandleader who writes the music for the band, Castelli says he's trying to motivate the drumming community to be more musical, come out from behind the kit, lead a band and yes, even compose music.

Here's just some of what is being said by journalists.

“As a drummer, Castelli is dominant while ironically not appearing to dominate the tunes. His drumming fades in and out, and when he comes out from the shadows, you realize you’re listening to a guy who is in the same league as Tony Williams, Billy Cobham, and Art Blakey." Continue reading...

In November 2020, Castelli released Party at One World Plaza. In January 2021, All About Jazz (AAJ) selected its leadoff track “Vamos” (“Let’s Go!”) as Song of the Day. “‘Vamos’ takes just a few moments to open up into a bouncy latin jazz fusion groove powered by several sharp guitar and drum breaks, and the live version sounds even more raw, energetic and fun,” wrote Senior Contributor Chris M. Slawecki in AAJ’s June 2021 review. Slawecki continued, “Castelli demonstrates many of the different aspects to being a great jazz drummer as he leads his live ensemble through his own compositions in this energetic, bouncy and thoroughly lively party.”

“The opening and the closing tracks on this album point to greatness—a vision of the future of jazz. Soulful, provocative forums for improvisation that exceed the usual standards fare."

Born into a family of drummers (a grandfather, two uncles & his father), Robert learned the basics from his father, who, along with his Uncle, were lifetime members of the NYC Musicians Union, AFM Local 802.

By high school, having started private lessons as well as classes in music theory, he was playing professionally all over the NY/Tri-State area. He went on to study Theory & Composition, Piano, Guitar, Orchestra Percussion & Drums at the Westchester Conservatory of Music, State University of NY at New Paltz, and Drummers Collective NYC. Over the years he has studied with some of the most well known drummers in New York & the world including, Ed Soph, Gary Chester, Kim Plainfield, Tony “Thunder” Smith, Robbie Gonzalez, Robbie Ameen, Horacio el Negro Hernandez, and Joe Ascione.

After several years in Austria, Robert now lives in Barcelona, Spain, where he continues to play and record with well known & up & coming artists in just about every style (Pop, Rock, Funk, Jazz, Latin, World, Musical Theater, etc.) from small clubs to small stadiums.

His playing as a sideman has been written about in The NY Times online, Cadence Magazine, Jazz Halo Belgium, and Drums & Percussion Germany. His 3 Boom releases have received critical acclaim from some of the most widely read magazines and websites in the USA, Canada, UK, and Europe.

Robert is also an accomplished guitarist. He started out at 14, learning on his own with songbooks brought home by his father, who at the time worked for G. Shermer's in NYC to supplement his income. Eventually he went on to study with Mark Slifstien at Westchester Conservatory in White Plains, NY, and privately with ex Berklee guitar teacher Alex Adrian, in Queens, NY.

Founding Trio of Boom in 2007, Robert has played with different configurations of Boom! over the years, and continues to explore new musical territories as such.