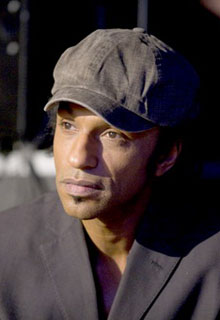 slideshow
Manu Katche is one of the most original drummers anywhere, defying categorization and straddling musical genres with ease and flair. A French national of Ivorian background, he has turned his hand to pop, rock, fusion and jazz, and his exposure to all these elements, plus his classical training, is indelibly stamped in a playing style all his own.

For over 20 years, Katche has toured and recorded with such iconic figures as Sting and Peter Gabriel, bringing his highly distinctive time keeping to their music and touring all over the world. As a sideman, he has recorded with an impressive array of musicians and songwriters and has played on Jan Garbarek's recordings for nearly two decades.

Katche's association with Garbarek has ultimately led to a string of successful albums on the Norwegian saxophonist's longtime label, ECM, the latest of which is Third Round (2010), featuring a revamped lineup with keyboardist Jason Rebello (Jeff Beck), saxophonist Tore Brunborg (Masqualero, Tord Gustavsen) and, in a rare move for the label, electric bassist Pino Palladino, better known for his ubiquitous session presence in the British pop world.

AAJ's Far Eastern correspondent, Ian Patterson, spoke with Katche recently, shedding light on the drummer's association with ECM and how he has imbued a strong personality in his playing and much, much more in his extensive interview, Manu Katche: Play as You Are, published today at AAJ.

To celebrate the North American release of Third Round, AAJ is also featuring:

AAJ is committed to providing the most extensive coverage available about new releases, so be sure to check out all the buzz surrounding Manu Katche and Third Round at AAJ today!