Drummer Jerome Jennings Debuts As A Leader With "The Beast," New CD Set For Nov. 18 Release

I learned so much from [former Jazz Messengers] in terms of the spirit of the music. It's how you're carrying yourself and how you carry the music and move it forward by addressing where it came from. 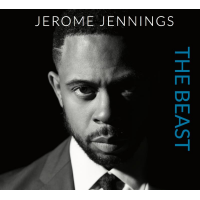 slideshow
Since moving to New York from his native Cleveland 12 years ago, Jerome Jennings has become one of the most in-demand jazz drummers on the scene. Currently a member of the Christian McBride Trio, Craig Handy’s 2nd Line Smith, and the groups of vocalist Paula West and singer/trumpeter Bria Skonberg, Jennings boasts an impressive resume that speaks to his versatility and rhythmic mastery.

With the release on November 18 of his debut CD, The Beast, on his new Iola Records imprint, Jennings is now stepping out as a poised, swinging, and strong-minded leader in his own right. He has drawn together some of his favorite players from coast to coast—five-time Grammy-award-winning bassist Christian McBride, poll-winning fellow Ohioan Sean Jones on trumpet and flugelhorn, McBride trio pianist Christian Sands, longtime Harry Connick, Jr. trombonist Dion Tucker, and the explosive Oakland tenor saxophonist Howard Wiley, a member of Jennings’s current band—for a set of compositions by Freddie Hubbard, Ben Webster, and bassist Jon Burr; adaptations of an ice-cream-truck jingle and a chart-topping R&B hit (New Edition’s “Cool It Now”); and three originals by the leader. Jazzmeia Horn, winner of the 2012 Sarah Vaughan International Jazz Vocal and the 2015 Thelonious Monk Institute International Jazz Vocal competition, joins the sextet for an arrangement by Jennings and Curtis Fullerof the standard “You Don’t Know What Love Is.”

The title track is based on an incident in which a Princeton, New Jersey, police officer pulled Jennings over while he was driving home from a gig at 2 a.m. for allegedly having a tiny Cleveland Browns football helmet hanging from his rearview mirror. He was held for 50 harrowing minutes before being released without having even been issued a ticket.

The hard-swinging number begins with a press roll on the snare drum that slows to a stop, indicating the process of pulling off the road. Tension between the horn and rhythm sections during the head and solos reflects the way Jennings was repeatedly interrupted while trying to answer the officer’s questions.

“I call it ‘The Beast’ because that’s another way of saying ‘police’ or ‘system,’” the drummer explains. “Everything I do in that tune is significant.”

Jerome Jennings was born in Cleveland, Ohio, on October 28, 1980. His early interest in drums turned into a passion after his mother brought home an Art Blakey album. He played in various ensembles in high school before receiving a full scholarship to Ohio State University, where he studied with trumpeter Pharez Whitted. He went on to receive a Bachelor’s Degree in Music Performance from Rutgers University and a Master of Music Degree in Jazz Studies, Performance, and Drums from Juilliard.

In 2001, Jennings set out to meet and play with as many former members of Art Blakey’s Jazz Messengers as possible. They included Charles Fambrough, Curtis Fuller, Benny Golson, David Schnitter, Ronnie Mathews, Javon Jackson, Curtis Lundy, Wynton Marsalis, Lonnie Plaxico, Valery Ponomarev, Bobby Watson, Frank Lacy, and, the drummer adds, “even Mr. [Sonny] Rollins. He played a bit with Blakey. I worked with Sonny for three years. That was almost an out-of-body experience.

“I felt that if I could play with guys who played with great drummers, particularly Art Blakey, and they could tell me I’m swinging, then I’m swinging,” he explains. “I learned so much from them in terms of the spirit of the music. It’s not necessarily a technical thing. It’s how you’re carrying yourself and how you carry the music and move it forward by addressing where it came from.”

Jennings’s knowledge of and passion for the music has led to him teaching in a variety of jazz education programs over the years. He’s presently giving classes for Jazz at Lincoln Center’s Jazz for Young People program, Jazz for Teens at the New Jersey Performing Arts Center and is a featured lecturer for Jazz At Lincoln Center’s Swing University.

When he’s not playing drums or teaching, Jennings pursues an acting career as time permits. He played a minor role as Chuck Berry’s drummer in the motion picture Cadillac Records, spent four months off-Broadway at The Little Shubert Theatre playing drums and acting in Lady Day starring his friend/mentor Dee Dee Bridgewater, and recently starred in Laurence Holder’s one-man play The Gospel According to Max Roach at the Nuyorican Poets Café in New York City, among other credits. He’s had to miss out on some important auditions because of his musical commitments, “which is always tough. But music is the priority for me.”

Jennings has planned CD release shows for 11/22 at Dizzy’s in New York City, and 11/26-27 at Night Town in his hometown of Cleveland. Personnel will include Dion Tucker, trombone; Kenyatta Beasley, trumpet; Howard Wiley, tenor saxophone; Christian Sands, piano; and Elias Bailey, bass. Jazzmeia Horn will be featured with the sextet at Dizzy’s.