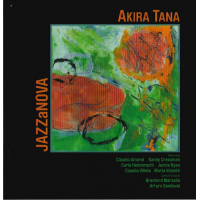 slideshow
Akira Tana didn’t have to go looking for Brazilian music as a young musician. An elite jazz drummer since the mid-1970s, he’s been immersed in the verdant hothouse of Brazil’s surging rhythms and sensuous melodies his entire career. His new album JAZZaNOVA, which is slated for release by Vega on March 1, 2018, reflects an abiding passion kindled by his formative experiences with some of Brazilian jazz’s foundational figures. It’s a treasure trove of Brazilian riches, with beautifully crafted arrangements designed to shine a lustrous new light on classic material.

Featuring a cast of top-shelf Bay Area players, JAZZaNOVA was designed to showcase a superlative cast of singers and instrumentalist interpreting some of the Brazilian Songbook’s definitive standards and lesser known gems, with a couple of songs en Español included for good measure. While Tana is best known for the talent-proving band he co-led with bassist Rufus Reid, TanaReid, and as first call accompanist who toured and recorded with jazz legends such as James Moody, Zoot Sims, the Heath Brothers, Art Farmer and J.J. Johnson, he’s collaborated with Brazilian masters from the start of his career.

“It goes back to when I was in school in Boston,” Tana says. “Trumpeter Claudio Roditi was living there after studying at Berklee, and we’d play Brazilian jazz around Boston that sometimes included alto saxophonist and composer Victor Assis Brazil and trombonist Raul de Souza. I met Ricardo Peixoto when I was doing gigs in Nantucket during the summers. I followed his career and am fortunate that he ended up living in the San Francisco Bay Area and was able to be involved in this project.”

Rio-born Peixoto, a Bay Area mainstay who provides the essential pulse throughout the album, is a direct link between Tana’s early immersion in Brazilian music and JAZZaNOVA. Tana’s band also features Peter Horvath on piano and Fender Rhodes, Airto and Flora Purim collaborator Gary Brown on bass, and percussion master Michael Spiro. Saxophonist Branford Marsalis or Cuban-born trumpeter Arturo Sandoval contribute vivid solos on almost every track, providing incisive commentary for the six extraordinary vocalists. As Andrew Gilbert writes in the liner notes, “the album’s concept is based upon matching singers and songs…an eclectic cast united by the fact that each possesses an utterly personal sound and approach.”

While Helmbrecht isn’t usually associated with Brazilian music, Jackie Ryan has honed a polyglot repertoire encompassing numerous Brazilian standards, and her aching rendition of Jobim’s “Por Causa De Você” (Don’t Ever Go Away) taps into the same bottomless well of desperation that made Frank Sinatra’s collaboration with the composer so powerful. Ryan and the great Argentine vocalist Maria Volonte effectively team up on Peixoto’s sleek and buoyant multi-lingual arrangement of Jobim’s “Chega De Saudade” (No More Blues).

One of Argentina’s most celebrated tango singers, Volonté fits neatly into the JAZZANOVA fold. In addition to “Chega De Saudade,” she performs another duet, joining Sandoval on the album’s closer, the romantic ballad “La Gloria Eres Tu,” indelibly linked to Mexican superstar Luis Miguel. Volonté’s impassioned performance is no surprise, but Sandoval’s potent vocals offer another glimpse at his prodigious musical gifts.

Throughout the session, Tana renders the various grooves with taste and an unerring ear for textural support. As authoritative as he is behind the drum kit, he’s emerged in recent decades as a savvy producer who can turn a concept into a singular musical communion, such as 2011’s Kiss Kiss Bang Bang (Sons of Sound), a session exploring title themes from James Bond films, and 2013’s Otonawa, a strikingly beautiful project marrying traditional Japanese melodies with trenchant jazz improvisation.

Born in San Jose in March 14, 1952 and raised in Palo Alto, Tana played in a rock band as a teenager, and become a devoted jazz convert after acquiring a used copy of Miles Davis’s classic 1966 album Miles Smiles. His father led various Buddhist congregations around the Bay Area and his mother played koto and piano. While majoring in East Asian Studies at Harvard, he continued to play jazz whenever he could. His friendship with budding jazz drum star Billy Hart led to an early epiphany when he had a chance to sit in with Herbie Hancock’s Mwandishi band in the early '70s. A protégé of the great drum teacher Alan Dawson (whose past students included Tony Williams and Clifford Jarvis), Tana decided to pursue music full time and enrolled at New England Conservatory, graduating with a degree in percussion, still finding time to do tours with Sonny Rollins, Hubert Laws, and the Paul Winter Consort.

Other extracurricular gigs with heavyweight jazz artists like Milt Jackson, Sonny Stitt and Helen Humes during his eight years in Boston helped pave the way for his move to New York in 1979. He made a name for himself as a leader with TanaReid, a band he co-founded and led with bassist Rufus Reid. During the course of the 90s the group toured internationally, released six CDs and helped boost the careers of brilliant young improvisers like pianist Rob Schneiderman, and tenor saxophonists Mark Turner and Ralph Moore. With JAZZaNOVA , he’s staked a rightful claim to the Brazilian jazz canon, joined by a cast of redoubtable cast of collaborators.

JAZZaNOVA will be available on Amazon and iTunes on March 1, 2018. Listen to “Waters of March/Aqua de Marco” on Soundcloud.