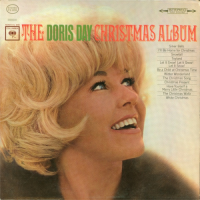 Each December for the past 10 years, I've carefully chosen a different album for inclusion in my annual JazzWax Vintage Holiday Album Hall of Fame. I established this yule repository in 2008 to steer you to great old-fashioned favorites that may be unknown to you or have been forgotten. I'm a shameless fan of holiday music, provided it meets my criteria: smart song choices and arrangements.

My vintage pick this year is The Doris Day Christmas Album. Recorded in 1964 for Columbia, the album featured Day's neighborly voice on a dozen holiday favorites. What's interesting about the album is that virtually all of the tracks are taken at near-ballad tempo, which allows you to soak up the sunny sound of Day's voice. The album was produced by Allen Stanton and arranged by easy-listening maestro Pete King.

Fortunately, the Real Gone Music label has released Doris Day: Complete Christmas Collection. Day's original 1964 album is here along with 10 additional holiday tracks by the singer that appeared on other albums or were never before released. Go here.

Here's I've Got My Love to Keep Me Warm with Frank De Vol and His Orchestra from Day's Hooray for Hollywood album in 1959...

Now meet the rest of the JazzWax Vintage Holiday Album Hall of Fame family, in order of their induction, with links to Amazon (most are probably available at Spotify)...

2015—Two albums with the same name: Bobby Timmons' Holiday Soul and Don Patterson's Holiday Soul. Both trio albums were recorded for Prestige in Nov. 1964—the former on the 24th and the latter on the 25th.

Bonus: Here's one of my favorite all-time holiday tracks—Jo Stafford's By the Fireside, from her Ski Trails (1956) album with the Starlighters, arranged by husband Paul Weston...