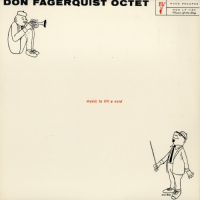 The octet plays a special role in the evolution of jazz, especially on the West Coast in the 1950s. Record labels loved octets because they saved them money without compromising much on sound. Jazz fans loved them because eight instruments seemed to be the maximum number the ear could hear distinctly. Octets also meant a lower risk of recording mistakes and re-takes.

By the early 1950s, as big bands became financially difficult to sustain and musicians wanted more artistic freedom, top instrumentalists and arrangers began leaving bands to form octets. These compact groups not only allowed the musicians to earn more since they were dividing paydays among fewer people, but octets also found plenty of work on college campuses playing at proms, dances and other events. Arranged skillfully, an octet delivered almost the same wow as a big band.

The first West Coast musician to pioneer the West Coast sound in an octet was Dave Pell. His album Dave Pell Octet Plays Irving Berlin (Trend) was so successful that it led to a long series of Dave Pell octet albums. (If you want to know more about Dave and the birth of his octet, read my JazzWax interview series with him here.) Other musicians quickly followed suit on the West Coast, including Bill Holman, Lennie Niehaus, Milt Bernhart and Zoot Sims to name just a few.

One of my favorite West Coast octet albums from the 1950s is the Don Fagerquist Octet: Music to Fill a Void, also known as Eight By Eight (Mode). If I could play the trumpet, I'd want to play like Fagerquist. To me, he had the quintessential Hollywood studio sound without bebop influences. His L.A. tone was pure and beautiful, like Bobby Hackett's. Fagerquist could roll up chords or down with juicy swing and precision. He was a gorgeous player, which is why he was on so many recording sessions.

Remarkably, despite being on early 400 jazz recording sessions, Eight By Eight was Fagerquist's only album as a leader. Which seems nuts, given how pretty he played. I have to assume the reason was that he was too busy as a prolific sideman to bother. Alcohol abuse also played a role, keeping him from taking on the responsibilities of a leader.

Whenever I listen to this album, I daydream about going back in time and sitting in the control booth as tape ran on the group. Fagerquist's solos are astonishing.

Don Fagerquist died in 1974 at age 46. He began playing professionally as a teenager. Dave Pell reflected on Fagerquist in another JazzWax interview here.