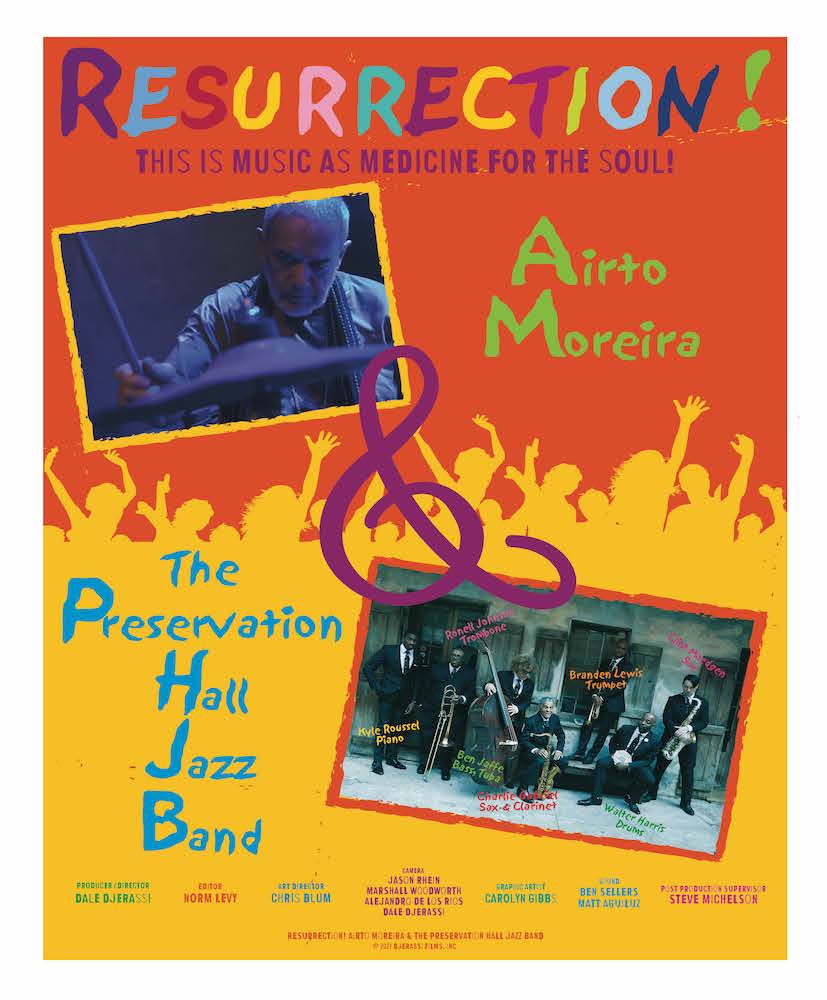 slideshow
With an upcoming premiere at the Woodstock Film Festival Djerassi Films is excited to present Resurrection! Airto Moreira and the Preservation Hall Jazz Band.

Airto Moreira is a world-renowned jazz drummer and percussionist from Brazil, who exhibited great talent at a young age.

In his twenties, he traveled to the U.S.A. in pursuit of Flora Purim, the woman with whom he had fallen in love, who had left Brazil to sing Bossa Nova with saxophonist Stan Getz. Over the years, Airto became a major musical figure by bringing his Brazilian percussion to American jazz. His credits range from records, performances, and compositions with Miles Davis, Chick Corea, Wayne Shorter, and numerous other notable artists to recording his own solo records.

The Preservation Hall Jazz Band, founded by tuba player Allan Jaffe, began touring widely and attained a high level of recognition. The Preservation Hall Jazz Band was awarded the National Medal of Arts, with this citation: “With enormous talent and pride, this ageless ensemble has toured the world displaying the unbreakable spirit of New Orleans and sharing the joy of New Orleans jazz with us all."

Filmmaker and jazz enthusiast Dale Djerassi attended four nights of performances by the Preservation Hall Jazz Band at SFJAZZ Center, the premier venue for jazz in San Francisco. Each night, a different musical guest would perform with the band.

On the last night, Dale approached Ben Jaffe, creative director, as well as tuba and bassist in the Preservation Hall Jazz Band, to ask if they had ever considered playing with Airto Moreira as their guest. Ben was excited by the idea and invited Airto to come to New Orleans for Mardi Gras, along with his accomplished daughter and jazz singer Diana Purim, and her husband, hip hop artist, and band mate Krishna Booker, who perform together as Diana Purim and Eyedentity.

In the film Dale Djerassi documents how these powerful forces in the world of jazz come together to create a once in a lifetime event—following them from their first meeting at Congo Square on Mardi Gras morning to their arranging, rehearsing, and performing at the legendary Preservation Hall the next night. Taking the viewer behind the scenes, Dale Djerassi navigates the musical alchemy of this meeting and watches how music reignites Airto’s passion to perform.

This magical Mardi Gras musical meeting has led to the announcement of a new Diana Purim & Eyedentity album on the Ropeadope label, coming later this Fall, entitled Pais Da Maravilha (Wonderland) featuring a single with the Preservation Hall Jazz Band.

This film's world wide debut will be taking place at Woodstock Film Festival on October 3rd at 1 PM. Additionally, the film will be available for viewing for the virtual festival starting on September 29th here.

Dale Djerassi, president of Djerassi Films Inc., produces and directs documentary films, including Nada Será Como Antes (Nothing Will Be As It Was), about jazz musicians Flora Purim and Airto Moreira, Bhutan: A Strange Survival, about a Buddhist kingdom, Oil On Ice, about the Arctic National Wildlife Refuge (IDA Pare Lorentz Award winner), and Koko – The Talking Gorilla, about the sign language speaking gorilla. He was also a producer of ’68, an independent feature film set in San Francisco.

He serves on the board of SFFILM and the Djerassi Resident Artists Program, both in California.