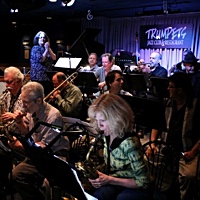 Formed by composer/pianist Diane Moser and a dedicated group of musicians and composers with the intention of exploring the possibilities of big band music and moving it forward, the band has lived up to its mission since its debut gig in January 1997.

The DMCBB is equally at home playing the classics and pushing boundaries. Any given set might contain tunes that would be a good fit for big band greats throughout jazz history, along with straight-ahead jazz, Latin, funk, blues, Indian raga, and experimental efforts. They have visited hip-hop territory, performed a jazz opera, and paid tribute to legendary composers such as Charles Mingus, Jaki Byard, and Oliver Nelson. Special guests like singers, poets, spoken word artists, actors, filmmakers, and sound painters have lent their talents to the fearless ensemble, which has also hosted talks by educators and others delivering tributes and oral histories. The DMCBB has even ventured into the cosmos with “Science Meets Music” and “The Music of the Spheres” gigs featuring Moser originals and George Russell’s “Jazz in the Space Age,” making them the only band besides Russell’s to ever play the suite.

In the past two decades, the DMCBB has hosted more than 100 guest composers, from internationally acclaimed jazz icons such as Jane Ira Bloom, Mark Dresser, Howard Johnson, Oliver Lake, and Michele Rosewoman to student writers hearing their compositions performed by a large ensemble for the first time.

It’s impossible to separate the band’s music and mission from the vision and contagious energy of leader Diane Moser, a.k.a. “D-Mo.” Moser has released six CDs as a leader or co-leader, including one with the DMCBB; a second album with the big band is in the works.

As a featured performer and composer performing with ensembles across the country including jazz bands big and small, chamber music and more, Moser has worked with Mark Dresser, Marty Ehrlich, Mark Helias, Gerry Hemingway, Howard Johnson, Oliver Lake, Charles McPherson, Diamanda Galas, and many others. She is currently on faculty at the New School for Jazz and Contemporary Music and Vermont College of Fine Arts MFA Music Composition Program. Moser’s skill and talent have been recognized with numerous awards, grants, and fellowships, including from Chamber Music America, New Music USA, the MacDowell Colony, Virginia Center for the Arts, and the Millay Arts Colony. A versatile and in-demand talent, Moser has worked with dancers, written scores for award-winning documentary films, composed for musical theater, and more.

Keeping a big band together for 20 years is no small feat, especially when it’s made up of players who lead their own bands and/or are in-demand sidemen. There’s a warm, family vibe to the DMCBB, presuming your family is enormous, talented, and eager to work and play together at every opportunity. After two decades, some of the original band members are still on the bandstand at every gig.

Besides being known for its adventurous music, a strong community feeling is a trademark of the DMCBB under Moser’s leadership. In addition to years of playing regular monthly gigs, the band has produced special events such as a September 11th concert benefiting the Red Cross; benefit concerts for members of the jazz community facing health issues; and peace concerts, including annual celebrations of Daniel Pearl World Music Day.

Moser has invited DMCBB members to bring in their compositions, and sometimes even their own bands to scheduled gigs, and provided opportunities for high school student bands to play opening sets at Trumpets. The bandleader mentors and encourages newbies, as well as inspires veteran players, composers, and writers who have dropped out of the music world to give it another try, and provided an outlet for their creativity.

Regardless of the occasion or the repertoire, the style, or the complexity of the music, listeners can count on each Diane Moser’s Composer’s Big Band concert being heartfelt, dedicated, adventurous and flat-out fun: Listeners are gonna be entertained and inspired.

The DMCBB will delve into its enormous and enviable repertoire March 22, with the focus on works by resident composers. There are bound to be some surprises, including new music, and surprise guests onstage and in the audience.