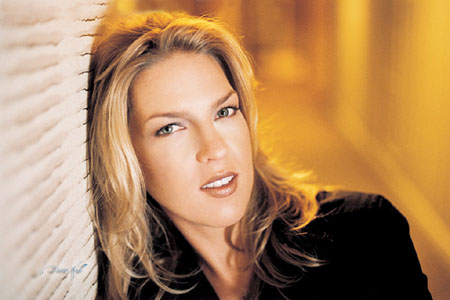 GRAMMY Award-winning jazz singer/pianist Diana Krall makes a stop in Los Angeles to participate in a number of special events.

First, Diana Krall joins Paul McCartney who will commemorate the release of his new album Kisses On The Bottom with a once in a lifetime streaming performance taking place live at 7:00 p.m. PST Thursday, February 9, from the famed Capitol Studios where much of the new album was created. Diana Krall, Joe Walsh (guitar), John Clayton (bass), Karriem Riggins (drums), John Pizzarelli (guitar) , Mike Mainieri (vibraphone), Anthony Wilson (guitar) and Alan Broadbent (conductor/arranger) will back Paul McCartney for the Capitol live stream event. The album was produced by Tommy LiPuma and features Diana Krall and the musicians above, minus Joe Walsh.

On February 10, Diana Krall performs three songs at one of the most prestigious events held during Grammy week, the MusiCares Person of the Year tribute which will celebrate Paul McCartney's artistic achievements and philanthropic work.

As the finale for Grammy week, Diana Krall has been invited to perform at the 54th Annual GRAMMY Awards which will take place live on Sunday, Feb. 12 at Staples Center in Los Angeles and will be broadcast live on the CBS Television Network from 8-11:30 p.m. ET/PT.

The celebrated musician, Krall, has not stopped since the release of her 2009 Grammy-winning, platinum album Quiet Nights. She has been travelling the globe, touring in Canada, Europe, UK, USA, Russia, Australia, South America and the Middle East, performing on almost every continent. In addition to her touring and appearance schedule, the acclaimed musician took a short break to produce her first record for another artist, Barbra Streisand's Love Is The Answer, which debuted at #1 on the Billboard 200 chart upon its release.

Never slowing down, Diana Krall contributed a track “Simple Twist of Fate" for the Chimes of Freedom: The Songs of Bob Dylan Honoring 50 Years of Amnesty International released last month.

And Diana Krall has much more already planned for 2012, more details to be announced soon.