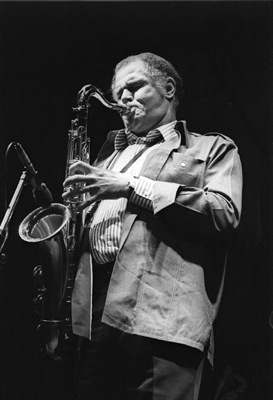 The two tenor titans met in  Munich, Germany, on October 27, 1965. Ervin was touring Europe at the time and Gordon was residing in Copenhagen. Fortunately, Prestige records, Ervin's label at the time, was there to capture the meeting.

Only two tracks were recorded, each filling a side. On Setting the Pace, Gordon took the first solo. On Dexter's Deck, Ervin kicked things off. The first track runs just over 19 minutes while the second lasts for nearly 23 minutes. The rhythm section featured Jaki Byard on piano, Reggie Workman on bass and Alan Dawson on drums.

All in all, my vote goes to Gordon. Ervin [pictured] may have been playing out of the box, with freer, Coltranesque lines. But  Gordon is immensely more interesting to listen to and a lot more fluid and melodic as he tirelessly runs chorus after chorus of ideas. Ervin also pauses often to reload by landing and lingering on notes, the musical equivalent of “Uhhh" in a speech.

I asked Maxine Gordon, the saxophonist's widow, about this summit yesterday. Here's what she said:

“Prestige arranged the date. After the club appearance, Dexter was in Berlin with Kenny Drew on October 30 with Booker Ervin playing a jam session with Sonny Rollins, Kenny Drew, Niels Henning Orsted Pedersen and Alan Dawson. There is a radio broadcast of Scrapple From the Apple."

One only wonders what the audience thought that night and what these two talked about afterward. The October 30 date doesn't sound half bad either!

JazzWax tracks: Settin' the Pace and Dexter's Deck are available on CD here or on Dexter Gordon: The Complete Prestige Recordings here.