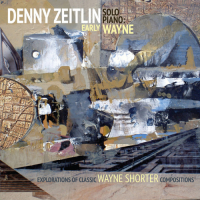 One of my favorite jazz piano albums of the year so far is Denny Zeitlin's new album, Early Wayne—featuring Denny's solo impressions of Wayne Shorter's compositions. Denny's approach is tremendously exciting and free-spirited. He covers the keyboard with a range of churning attacks and with glimmering sensitivity. In Denny's hands, Shorter's music comes rushing in at you like the surf. It hits you, surges over you and the rhythmic energy keeps churning on the back end.

The album was recorded before a live audience in December 2014 at the Piedmont Piano Company (above)—a Mercedes-Benz dealership of a piano emporium in Oakland, Calif., that provides top-notch instruments worldwide. The pianists on the calendar of Piedmont's upcoming in-store concerts is enough to get one to buy a round-trip ticket to San Francisco. The concert space is flawless, providing Denny and Wayne's compositions with rich, dimensional fidelity. You feel as if you're seated on the piano bench next to Denny.

All of the compositions on the album were recorded by Shorter in the 1960s, with the exception of Ana Maria, which Shorter recorded on Native Dancer in 1974. The song choices and order are perfect: Speak No Evil, Nefertiti, Ju Ju, Teru, Toy Tune, Infant Eyes, Paraphernalia, Ana Maria, E.S.P. and Miyako.

As Denny point out in his brief liner notes, Shorter's music has been an inspiration dating back to 1959, when Denny was a junior at University of Illinois at Urbana-Champaign. Back then, he was playing locally with Ira Sullivan, Wes Montgomery, Joe Farrell and many other jazz giants. Billy Taylor was a fan as was George Russell, and Bill Evans regularly performed and recorded Denny's composition Quiet Now.

On Early Wayne, we hear Denny's passion for the music on each track, as he digs deeper and deeper on songs. What I love most about this album is how Denny reconstructs Shorter's stormy and tender themes, launching explorations that are simpatico with Shorter's own vision. In truth, this is a concept album meant to be heard from start to finish, as if you were reading an engaging Shorter biography.