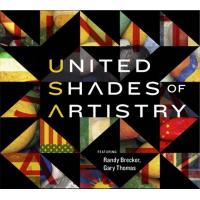 Baltimore and Washington, D.C. are not cities that immediately come to mind when imagining fertile grounds for the birth of World Jazz bands. Yet these metropolitan areas boast as diverse a multi-cultural population as any region of the U.S. and generations of musicians have been nurtured at both jam sessions within the Capitol Beltway as well as up I-95 within the hallowed halls of the Peabody Conservatory of Johns Hopkins University. United Shades Of Artistry, the self-titled debut recording of a quartet founded in 2014 by pianist and composer Levon Mikaelian, mines the riches found in both milieu. A native of Yerevan, Aremenia, whose family emigrated to the U.S. after the collapse of the Soviet Union, Mikaelian’s band features guitarist John Lee, bassist Blake Meister and Nigerian drummer Tosin Aribisala. Each member contributes a unique and personal instrumental vision and voice and together they deliver an eloquent musical statement that fuses elements of modern jazz, rock, Eastern European, Latin and African music and rhythms. Trumpter Randy Brecker appears as a guest on the album’s opening track and tenor saxophonist Gary Thomas is featured on four others.

“I trace the origin of the band and this recording back to a local D.C. jam session where I first met Tosin,” Mikaelian recalled. “We played some music and then started talking about the similarities between Armenian and Nigerian 6/8 rhythms that led me to develop some ideas regarding how people, like those rhythms, are simultaneously different yet similar,” he continued. “As I began writing music for this project, I went to as many jam sessions and my friends’ gigs as possible, seeking something unique in their playing that would resonate with this idea of diversity and unity that was developing along side my spiritual interests in Buddhist philosophy. In the end, I chose Blake, who teaches at the Peabody Conservatory and is of German, Danish and Irish ancestry, for his incredible versatility and musicality and chose John the “Chinese Irishman" for his unique guitar sound and ability to embody in his own personal way any song he's playing.”

Six of the eight songs on United Shades of Artistry—of which three are in 4/4, one in 4/4 & 3/4, two in 6/8, one in 5/8 and one in 5/8 & 6/8&#151are penned by Mikaelian and each was inspired by either a significant person or influence in his life. “Cloudy Minds," which features a searing solo by Randy Brecker, is named after a Tibetan Buddhist meditation visualization technique. “During a meditation you have different thoughts coming through your mind that can prevent you from attaining clarity. Those thoughts are the clouds,” Mikaelian explains. “’The Story Teller’ is inspired by the story of Buddha, how he spent his life walking from town to town, telling his stories, trying to help people deal with the reality of suffering,” he continued.

Mikaelian’s Eastern European roots are the source of three songs on the album. “Shorora" is by Sheram (1857-1938), an Armenian gusan or poet/minstrel (the gusan were the creative and performing artists - singers, musicians, dancers, storytellers and folk actors - in the public theaters of Parthia and ancient and medieval Armenia) and “Speak No Word" was inspired by the poem “Silentium" by Fyodor Tyutchev, an illustrious 19th century Russian Romantic poet. “Hop-hop" is a traditional Armenian folk dance song.

Mikaelian composed “Shades" to express the idea of “celebrating the different shades in all that surrounds us.” “In the last section of the song the melody repeats and every time it does so it evolves into a different harmonic element which is a musical metaphor for the idea of different shades representing the vibrant and beautiful dynamics of life,” he explained. “Davismile" was inspired by and is dedicated to the first smile of MIkaelian’s first born son Davis and “I Love You More" is a ballad dedicated to his wife Nune.

“This album reflects the journey I've been on up to this point in my life and is a major validation of everything I've learned and didn't learn,” Mikaelian explained. “For example, a while back I made a decision that was not very popular at the time. I received a scholarship to attend the Berklee College of Music but a month after moving up to Boston I decided to return to D.C. to marry Nune. Releasing my debut album as a band leader has been a huge learning experience for me as the entire process has been full of challenges and realizations that proved tremendously inspiring.”

Levon Mikaelian was born into a family of musicians in 1980 in Yerevan, Armenia. Introduced at a very young age to classical music and jazz, he cites Bach, Mozart, Beethoven, Chopin and Khachaturian among the composers he was inspired by as a child. After beginning his professional piano training at age seven, he was introduced to and profoundly influenced by the music of Chick Corea, Miles Davis, Herbie Hancock, Keith Jarrett, John Coltrane and Bobby McFerrin among other jazz masters. Mikaelian trained at an intensive music school, participated in several piano competitions throughout Armenia and was awarded a diploma from the Babajanyan National Competition in 1995. In 1996, he was accepted to the Komitas State Conservatory where he majored in Piano Performance and performed with many jazz, rock and pop bands. In 1999, Mikaelian and his family immigrated to the USA and he has become very involved with jazz in the Washington, D.C. area while also serving since 2003 as music director of the Maryland Youth Ballet, which he joined as a pianist in 2000. In 2008, he was the lead singer on the album “With a Song in My Heart” that he released with the group Double Sharp.